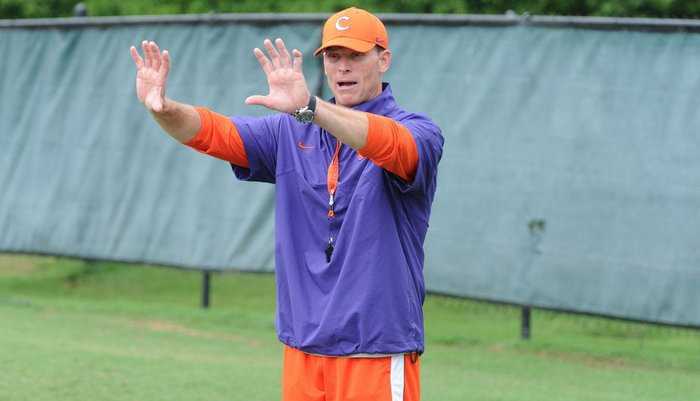 Brent Venables
Def. Coordinator / Linebackers
View Full Profile has been coaching football for 19 years and has seen it all, but Clemson's situation at linebacker is as dire as he has ever been around.

That situation has led Venables to declare a state of emergency in his linebacker room.

The injuries and departures make the next two recruiting cycles extremely important.

“It's an emergency. It really is, particularly looking forward to a year from now and where we're at,” Venables said. “This is a really important recruiting class - this one and the next one. It's critical and it's as critical as I've every been around at bringing in the right guys because we're going to need them.”

Kendall Joseph
RS Fr. Linebacker
#34 5-11, 225
Belton, SC
View Full Profile , who has battled injury throughout fall camp, and Venables said that overall he was pleased with how the remaining linebackers performed.

Ben Boulware
Jr. Outside Linebacker
#10 6-0, 235
Anderson, SC
View Full Profile was out. We held Kendall Joseph today. Korie Rogers wasn't here. We don't have many guys,” Venables said. “I was really proud of the guys that did play and compete. B.J. Goodson

Martin Aiken
RS Jr. Defensive End
#53 6-2, 255
Smoaks, SC
View Full Profile has moved from defensive end to outside linebacker. That means there a lot for those young guys to learn.

J.D. Davis
Fr. Linebacker
#33 6-2, 220
Clemson, SC
View Full Profile , Martin Aiken - as a WILL linebacker,” Venables said. “We're trying to develop some depth there. He's got the toolset to do it. He just doesn't know what he's doing yet, but he's capable of doing it. There's a lot to learn there for him. We'll see where he goes from here.

Overall impressions of the scrimmage

“I really thought our guys managed the line of scrimmage really well today,” Venables said. “We gave up a few long runs. I'm trying to coach them and it was my fault. We didn't have the right call in. I was trying to get some calls in real late and I screwed the guys a couple of times, so they misfit some runs. Otherwise, I thought our guys played pretty good up front. It's really inconsistent when you see three groups of guys. We don't really have developed depth yet and it shows at times.

“We lost Boulware after the second series and that really messed up our chemistry with the first group. We've got to play better when the ball is in the air. We had too many pass interference calls today. We had an offside or two. We were undisciplined. We caused a bunch of turnovers and made a bunch of plays on their side of the line scrimmage. I liked a number of things. I'm pleased in the short yardage situations with the first group and second group. We need to be better in a bunch of areas. Thank goodness we aren't playing for three weeks. We need to get some guys healed up and learn how to play better, manage the game better, tackle better and cover better.”

“He needs to be smarter than that and show more discretion and discipline. I didn't throw him out. The refs did it. He got chewed out and then he needed to be a coach and help the guys he put in the tough position. He wants to play. He does what he's asked to do.”

On the progress of the defensive line

"There's a lot to like. We've got to continue to develop the depth at defensive end. I thought Shaq Lawson

Kevin Dodd
RS Jr. Defensive End
#98 6-5, 275
Taylors, SC
View Full Profile are really consistent and they know what to do. They can beat guys one on one. They're really physical in the run game. Richard Yeargin

Richard Yeargin
RS Fr. Defensive End
#49 6-4, 225
Lauderdale Lakes, FL
View Full Profile has come along and he's gotten better. Inside, I like the guys we have. I think we can push the pocket. I think we can beat guys one-on-one. Between D.J. Reader

On the performance of the secondary

"At times they've looked really good and at other times not so good. We just had too many pass interferences today overall with the one, two and three groups. Overall, in camp, they have looked excellent, but you have to do it all of the time out here."

Rod Byers transition back to defense

"He's done some good things. He had a goal line tackle there and he went unblocked and running the A gap. He's 300 pounds and he's got to make the play. He's done some really good things in camp."