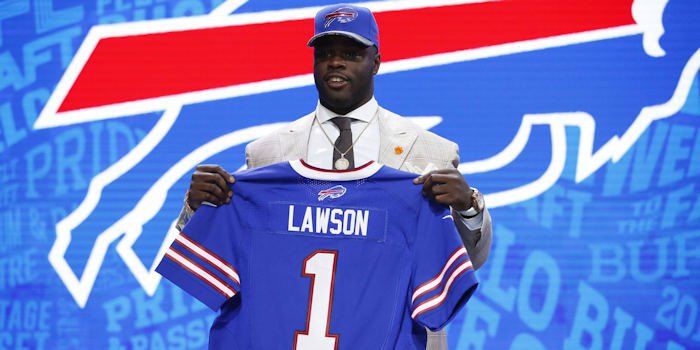 Lawson was the 19th overall pick in the NFL Draft (Photo by Kamil Krzaczynski, USAT)

Many high school recruits are already thinking about the NFL when they make a choice on which college to attend, which puts Clemson in good shape with recruits going forward.

Clemson had nine players in the recently completed 2016 NFL Draft, the second-most in one season in Clemson history and the second most in the nation this year.

Only Ohio State, with 12 draft choices, had more selections than Clemson. The only season that Clemson had more draft choices was the 1983 draft when 10 Tigers were selected. Seven of the nine players selected this year were defensive players, more than any school in the nation this year.

Combined with the four selections last year, Clemson has had 11 defensive players drafted over the last two years, also the most in the nation.

Want to have a chance to get into the NFL? Go to Clemson, especially if you are a defender.

Whenever we talk to recruits – especially defensive ends and wide receivers – one of their main reasons for considering Clemson is, “They put guys in the league.”

Now for an even better stat: Since 2011 the Tigers have had 24 players drafted by NFL teams, and 21 of those players are still on an NFL roster. The only three not on a roster as of today are quarterback Tajh Boyd, defensive end Da’Quan Bowers and running back Jamie Harper.

The ACC had 26 players selected overall and Clemson had nine of those selections. No other league school had more than three.

The Tigers have been very defensive with the draft picks in recent years - 14 of those last 23 have been on the defensive side of the ball – but that could change with next year’s draft.

As of right now, it wouldn’t be a stretch to see quarterback Deshaun Watson (a likely first round pick), running back Wayne Gallman, wide receivers Mike Williams and Artavis Scott, tight end Jordan Leggett and center Jay Guillermo all drafted.

It’s no coincidence and it’s no secret that Clemson’s ascension into the national elite – an ascension that’s been a few years in the making – is tied to recruiting and the Tigers’ success on the recruiting trail. That in turn has turned into more wins and the chance to play for a national championship. That added visibility means more draft picks. It all ties in.

Right now, if you’re a recruit and you’re thinking you might want to play in the NFL, Clemson is a good choice. And it doesn’t appear to be slowing down.

Some other notes about Clemson and the draft:

•With the selection of Shaq Lawson and Kevin Dodd, Clemson has had seven defensive ends selected in the last seven years.

*With the selection of Mackensie Alexander, T.J. Green and Jayron Kearse, Clemson has had 11 defensive backs selected in the last eight years.

•Clemson is now third among ACC schools in history in first round selections (27) and total draft choices (237).