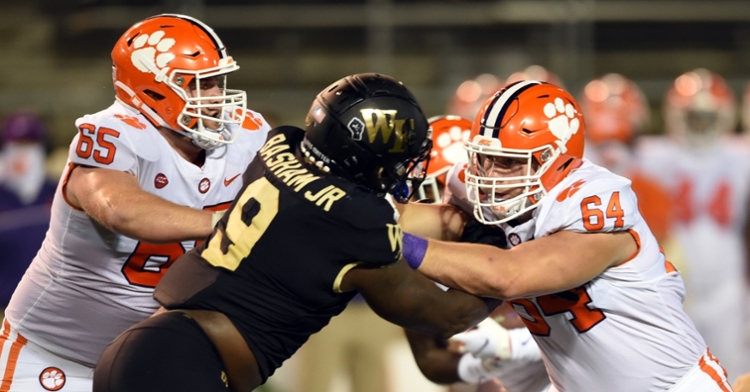 David Hood: Clemson enters spring with as much workable depth along the offensive line as I can remember. The Tigers lose two starters (center Cade Stewart and left tackle Jackson Carman) but return a wealth of talent and add a few talented freshmen into the mix.

There is a lot of excitement about tackle Walker Parks, who excelled in limited action last season. There were many in the program who thought that Parks should have been starting at some point late in the season, but we all know that coaches hate to reshuffle an offensive line once the season has started. Parks and Jordan McFadden should provide solid bookends.

Center will be a focus. Ryan Linthicum is one of the first true centers the Tigers have recruited in recent years, and he will battle Mason Trotter for the starting spot. The interior of the line also needs work after getting pushed around last season. That means that guards Matt Bockhorst and Will Putnam will have to fend off challengers.

Look out for freshmen Marcus Tate as the spring will be big for him as he tries to work himself into the two-deep and potential playing time. Both Tate, and summer enrollee Tristan Leigh, are future starters – and stars.

Brandon Rink: By PFF’s grading system, Clemson returns two of its top-3 lineman with both residing at the tackle spots with McFadden (83.5) and Parks (78.8), while Carman departs after meeting those two in the middle a bit grades-wise (79.8).

David mentions the workable depth and there are a number of guys the coaches just couldn’t work in for many reps last season, as opposed to previous years on the O-line. Each practice and scrimmage will need to bring that group from workable to some quality and competitive depth to push the starters and for starting roles.

I’m looking for two highly-touted rising sophomores in guard Paul Tchio and tackle Mitchell Mayes to take another step as you’d figure they’re in line for more snaps in 2021. Tayquon Johnson is another intriguing candidate for more playing time as a potential road grader at his size after converting from the defensive side last year.