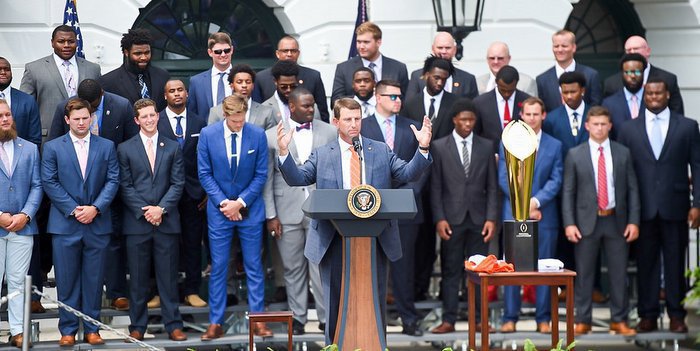 Jadar Johnson batting down the last second heave at Auburn. Marcus Edmond forcing James Quick out of bound with seconds left on the clock. N.C. State’s kick going wide left as time expired. Jordan Leggett diving for the endzone at Florida State. 56-7. Clemson shutting out Ohio State in the Fiesta Bowl. Being on the field as confetti rained down at the National Championship.

Those are all special moments of the 2016 season, but none were quite as special as a group of players (most of them) gathering one more time to celebrate their accomplishments.

They rode in a parade that drew 60,000-plus and they received their rings, but nothing quite compares to standing on the steps of the White House and overlooking the South Lawn and the Washington Monument as President Donald J. Trump sings your praises.

Lucky for me, I’ve witnessed all of those special moments, celebrated with friends and cried many tears as I watched my Alma Mater reach the college football mountain top, but what happened Monday afternoon in Washington D.C. was once in a lifetime.

On the hottest day of the year on the East Coast, I traipsed across the nation’s capital and waited at the entrance to the White House as the Secret Service ran my information for security and once inside it was almost like a different world. There was security everywhere, men walking by with sniper rifles, TV cameras lined the driveway and staffers ran here and there busy with the day’s work – In other words, just a normal day at the White House.

We walked in just before the daily White House briefing with Sean Spicer and, of course, I watched and listened totally out of my element, to see if Spicer would mention Clemson’s visit. Instead, he talked about the Comey hearings, Cuba, Puerto Rico becoming a state and, of course, Russia. In other words, just another day at the White House.

After the briefing, the Clemson media contingent waited outside for staffers to come and escort us to the South Lawn. There were five Clemson media member and a crew from ESPN, but as time drew nearer the media corps doubled and tripled to cover the President and the National Champions.

Finally, it wasn’t business as usual and it wasn’t just another day at the White House.

The Marine Corps Band struck up Tiger Rag and out came the National Champions led by Deshaun Watson and Carlos Watkins and Hunter Renfrow. After the assembled spectators spelled out Clemson not once by twice, then it was time for the moment everyone had been waiting for, Hail to the Chief began and out came Trump, Clemson president Jim Clements and head coach Dabo Swinney.

Trump addressed the crowd and then it was Swinney’s turn to, well, be Dabo Swinney. On what was probably a 30-minute Clemson infomercial, Clemson’s head coach made everyone in the country realize why Clemson is such a special place and why Clemson won’t just be a one-hit wonder. He poured his heart out to the fans and the politicians, but most importantly he made sure his players understood how much he loved and appreciated them.

The hustle and bustle of Washington D.C. continued outside the gates of the White House, but for a few minutes Clemson was once again the center of the sports world, the center of the free world and providing one more special moment to the fans that have followed the Tigers for years.