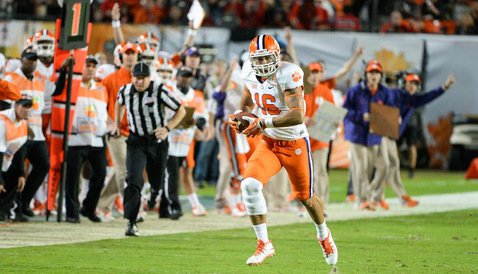 CLEMSON – For the first time in a few years, the Clemson football program enters the summer with a bevy of question marks surrounding the offense. While there may be more questions than answers right now, the coaching staff feels like the right players (answers) are in place, they just have to step forward.

With that in mind, TigerNet takes a look at the top spots on the depth chart on offense heading into a summer workouts, with an emphasis on the starters. Today we take a look at the skill positions.

Cole Stoudt
Sr. Quarterback
#18 6-4, 205
Dublin, OH
View Full Profile is the unquestioned starter heading into fall camp, and he likely would have been penciled in at the No. 1 spot even without the dismissal of Chad Kelly

The biggest question mark for Stoudt is how he will produce as the starter. He has had limited snaps against first-team defenses in his career, but did lead a game-winning drive against Boston College back in 2011.

Deshaun Watson
Fr. Quarterback
#4 6-3, 190
Gainesville, GA
View Full Profile redshirt? Will Watson show enough in the fall to earn playing time and gain experience before he takes over in 2015? How much of an impact will Stanford transfer David Olson have, and will he make the three-deep on the depth chart?

We wrote before the start of the spring that 17 practices and the spring game should give us a better idea of who will earn the most playing time at one of the most crucial spots on the field. We were wrong.

If you just watched the spring game, you would say that freshman Wayne Gallman

C.J. Davidson
RS Jr. Running Back
#32 5-11, 185
Clemson, SC
View Full Profile created a little bit of separation at the position. However, everything we heard during the spring pointed to the fact that senior D.J. Howard

Zac Brooks
Jr. Running Back
#24 6-1, 185
Jonesboro, AR
View Full Profile – the two most experienced backs on the roster – were firmly in the mix. Honestly – any one of those four could be the starter when the Tigers open the season at Georgia.

The player with the most upside, however, looks to be Gallman. He showed he has that bruising style offensive coordinator Chad Morris

Chad Morris
Offensive Coordinator / QBs
View Full Profile wants, and he can catch the ball out of the backfield. His blocking skills need to improve, but he might have the most “total package” skills of any of those four mentioned. Davidson earned significant snaps last season, and while he is perceived as a speed threat, he has learned to run in between the tackles.

Howard has battled injuries throughout his career, as has Brooks, so will their solid springs and their experience (140 combined carries) be enough to push them over the top in the early part of the season? Also, don’t forget that there are three 4-star prospects ( Tyshon Dye

Adam Choice
Fr. Running Back
# 5-10, 200
Thomasville, GA
View Full Profile , Jae’lon Olgesby) who weren’t on the field during the spring.

Morris said during the spring that he expects Clemson to run the ball better (more yardage) and more efficiently (better on short yardage) in 2014, but my best guess at this point says that there won’t be a featured back – this will be a running back by committee and the coaches will go with the hot hand.

The Clemson coaches got an infusion of young talent at this position on National Signing Day, inking Kyrin Priester

Trevion Thompson
Fr. Wide Receiver
# 6-3, 190
Durham, NC
View Full Profile . The first three enrolled in January and were able to take part in spring practice, but Thompson might be the most talented of the bunch, and he arrives on campus this summer.

However, don’t expect any of the freshmen to take over a starting role – the three starters would appear to be Mike Williams

Peake was held out of contact during the spring as he rehabs from the torn ACL he suffered early last fall. One of the team’s fastest players, Peake was granted a medical redshirt and will have two years of eligibility remaining. I watched him work out in full pads towards the end of the spring, and he didn’t look like he was favoring the knee. Peake had four receptions (245 snaps) in 2011, but had 25 receptions in 2012. He had eight receptions in what amounted to six quarters (89 snaps) last fall before tearing his ACL, but looked poised to have a breakout season. This season, he will be flying under the radar a little bit but might be the go-to-guy for Stoudt.

Humphries is Mr. Steady. He isn’t flashy, but had 41 receptions in 2013 while sharing the football with some guy named Sammy Watkins

Williams has NFL potential, pure and simple. He has the size (6-3, 205) and leaping ability to be a red-zone threat, but has to improve his blocking down the field and his route running this season. He had 20 receptions for 316 yards and three touchdowns in 404 snaps over 13 games (three starts) last fall, and is another receiver that looks to take the next step in the maturation process. However, he didn’t have the greatest of beginnings during the spring, but both head coach Dabo Swinney

Dabo Swinney
Head Coach
View Full Profile and Morris called out Williams publicly, and he responded with a strong finish.

Jordan Leggett
So. Tight End
#16 6-6, 235
Navarre, FL
View Full Profile is another player with NFL potential. He admitted last fall that he was lazy, leading to the nickname “Lazy Leggett” from his teammates. However, he spent time talking with former Clemson tight end Dwayne Allen

Sam Cooper
RS Sr. Tight End
#86 6-5, 250
Brentwood, TN
View Full Profile is more of a run-blocker at this point, and has had his share of injuries over the last year or so. Milan Richard

Milan Richard
Fr. Tight End
# 6-3, 233
Savannah, GA
View Full Profile is 2014 signee out of Augusta – and Herschel Walker’s nephew – who will be here this summer.