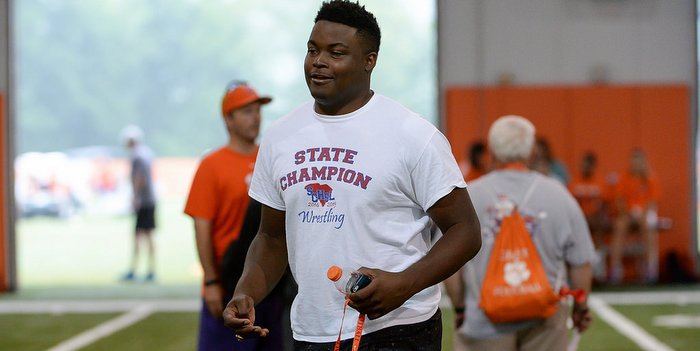 Simpson has been on Clemson's campus many times

Official visit season is upon us, and as National Signing Day nears and this weekend will see the Clemson coaching staff host its second of three official visit weekends.

Last weekend Clemson welcomed all of its 2016 commits who weren’t already enrolled, plus Trayvon Mullen and Michail Carter. This weekend will only be a group of four, with the most notable attendee being John Simpson.

*Clemson has courted Simpson – the 4-star North Charleston (SC) Fort Dorchester offensive lineman – for quite some time and he has been close to pulling the trigger and committing to the Tigers on several occasions, including last August.

However, his desire to see the process through and take his visits won out. Simpson has visited Clemson and South Carolina many times, but has only taken two official visits to this point – LSU in November and Florida last weekend.

The 6-4, 296-pound prospect will bring his mother, grandmother and brother to Clemson this weekend before wrapping up his visits next weekend with a trip to Alabama.

*Finley is a 4-star defensive back out of Niceville (FL) who has been on Clemson’s radar for quite some time. However, the last time Finley visited Clemson was during the summer of his junior season.

The 6-1, 190-pound safety told TigerNet earlier this week that he’s looking forward to seeing everything the Tigers have to offer.

Finley claims a top three of Georgia Tech, Miami and Clemson and plans to announce his decision the day before National Signing Day.

*Matthew Ryan is a 2-star offensive lineman out of New Orleans (LA) Newman and is being offered a walk-on spot.

The 6-3, 315 pounder has scholarship offers from Akron and SE Louisiana, as well as walk-on offers from Auburn, Clemson, Mississippi State and a handful of other schools.

*Vestavia Hills (AL) safety Nolan Turner is a prospect we just learned of Thursday afternoon when he announced his commitment to Clemson via Twitter.

Turner – a 6-2, 190-pound safety – is the son of Kevin Turner, a former teammate of head coach Dabo Swinney. He had a scholarship offer from University of Alabama Birmingham and a walk-on offer from Alabama.

Clemson had kept up with Turner throughout his high school career, originally offering him as a walk-on, but the departure of safety Jefferie Gibson earlier this week opened up a scholarship, allowing Swinney to offer him a spot at Clemson.

Turner told TigerNet that after meeting with Swinney he decided to accept the offer and visit Clemson this weekend.