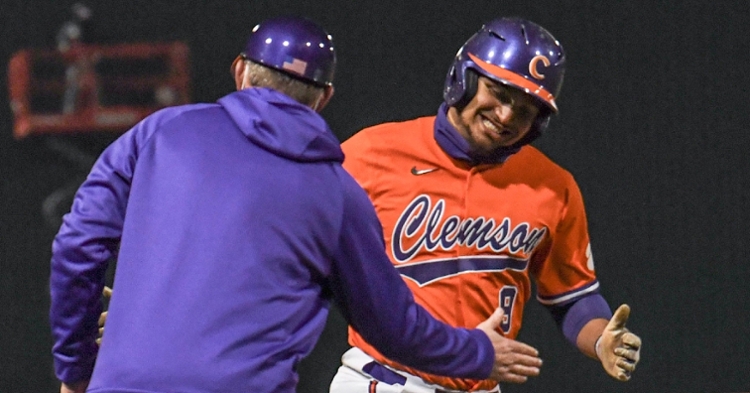 Taking the field for a first game in 345 days, the Clemson baseball team picked up where it left off in 2020, getting five solid innings from Davis Sharpe and a three-run homer from Jonathan French in a 5-0 victory over Cincinnati in the season opener at Doug Kingsmore Stadium Friday afternoon.

Clemson moves to 1-0 on the season. James Parker had two hits for the Tigers, while Bryce Teodosio matched his hit total from last season with a 3-for-4 effort that included a run scored. The shutout is the first in a season opener for the Tigers since a 2013 victory over William & Mary.

"The thing that I was most pleased with was how competitive our at-bats were with two strikes," head coach Monte Lee said. "We were in the plus two-column, walk and HBP to strike out, which is a big one for us we want to win that free 90 battle. And we had a bunch of them today did a great job of staying in the strike zone."

Sharpe and Cincinnati starter Evan Shawver were locked in a pitcher’s duel through the early innings. The Tigers had three runners thrown out on the bases in the early innings – two at home plate – as the teams were scoreless through four innings.

Shawver pitched four innings, giving up four hits while walking three and striking out two. He was replaced by Nathan Moore to start the fifth and the Tigers were able to break through for a run. Bryce Teodosio led off the inning by singling to left field on an 0-2 pitch, and he promptly stole second. Blake Wright flew out to center and Teodosio moved to third on the play. Dylan Brewer then singled up the middle for a 1-0 lead.

Sharpe went five innings, giving up just one hit while walking one and striking out nine. He threw 49 strikes in his 76 pitches. He was replaced by Mat Clark to start the sixth.

The score remained 1-0 until the bottom of the seventh. Brewer walked to lead off the inning and Elijah Henderson was hit by a pitch. French hammered a 1-2 pitch over the wall in center for a three-homer, the first of his Clemson career, and a 4-0 Clemson lead. The Tigers added another run after Pierce Gallo walked and Caden Grice drove a double off the wall in right-center and Clemson led 5-0.

Clark pitched the final four innings to pick up his first save of the season, giving up just one hit while walking none and striking out six.

Lee said he was proud of the way his team performed.

"It's the first game of the season. We expect there to be some mistakes and we got to do a good job of addressing it tomorrow in pregame and getting better and those aspects of the game," Lee said. "But every guy in the lineup had quality at-bats and just really, really proud of the way that we played and we played a great game defensively as well no errors."

Game two of the series is set for 3 p.m. Saturday with Cincinnati LHP Dean McCarthy facing RHP Ty Olenchuk of Clemson. The series finale is set for Sunday at 1 p.m., with LHP Garrett Schoenle of Cincinnati set to face LHP Caden Grice. All games are broadcast on ACC Network Xtra.

Here are the numbers on @frenchjonathan_'s first HR of his career! ???? pic.twitter.com/yLNjIWwhw6