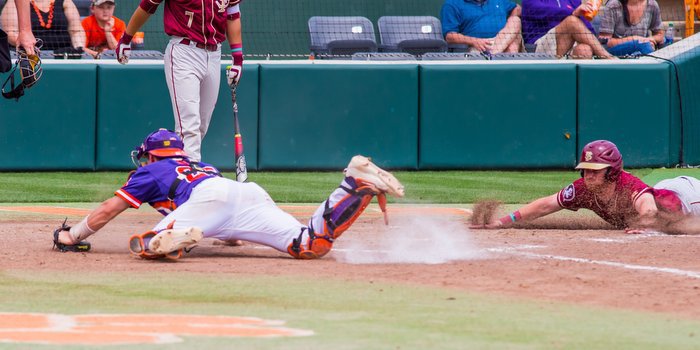 Two big errors and other defensive miscues didn’t help a struggling pitching staff as No. 3 Florida St. evened the weekend series with an 11-2 victory over the Tigers at Doug Kingsmore Stadium.

The Tigers got on the board in the bottom of the first inning after Chase Pinder led off with a single to center. Two outs later, Seth Beer beat the shift with a single to left-center and Reed Rohlman followed with a double to left that scored Pinder for a 1-0 lead.

The ‘Noles scratched for a single run in the second and got to Schmidt for two more in the third to take a 3-1 lead.

Clemson answered in the bottom of the third after Eli White singled with one out. White stole second and the Seminoles intentionally walked Beer to face Rohlman. Rohlman delivered again, however, lining a single to left to score White to make it 3-2 Florida St. Weston Wilson fouled a ball off of his toe, but the umpire ruled it fair and the inning ended with two runners on base.

The ’Noles – fueled by an error by White – pushed across two more runs in the fourth to take a 5-2 lead and chase Schmidt. Schmidt pitched 3.2 innings, giving up seven hits, five runs (three were earned) while striking out one.

Florida St. added four more runs in the fifth against reliever Alex Bostic – defense was once again an issue – and the Tigers’ bats went dormant after that.