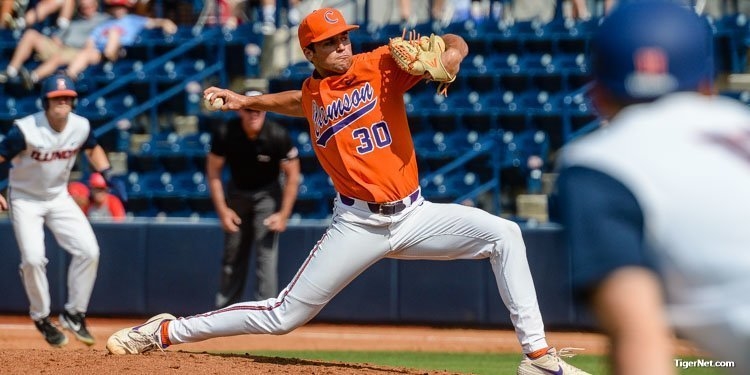 OXFORD, MS – Davis Sharpe said his run from the bullpen to the mound during the third inning of Friday’s win over Illinois was a little weird and a little surreal, but a quick pep talk from catcher Kyle Wilkie snapped him back to reality.

Sharpe hadn’t pitched since May 18th, but with starter Jacob Hennessy struggling to get outs in the first game of the NCAA Oxford Regional, head coach Monte Lee summoned his erstwhile Friday starter in from the pen.

Illinois pounded Hennessy for six hits and three runs, and the lefty was chased in the third inning after only seven outs. Enter Sharpe, who held Illinois to three hits and no earned runs over 6 2/3 innings. Making the performance even more impressive is the fact that it came in his first relief appearance of his college career and in his first NCAA tournament outing.

The win allowed the Tigers to move into the winner’s bracket.

“Great ball game today. Davis Sharpe was outstanding for us out of the bullpen,” Lee said. “Had to go to him early, maybe a little earlier than we would have liked to. It felt like, at that time, at that point in the game, it was the right time to go to him. Illinois just did an outstanding job of squaring up [Jacob] Hennessy. But we felt like offensively we were in good shape and we were gonna score some runs today.

“We would’ve liked to have gotten deeper into the game with Jacob, but we only used two pitchers in today’s game. Davis stepped up and pitched very well for us, and that was a recipe for a win today.”

In other words, Sharpe seized the moment.

“In Game One of a regional you have to do things like that in tight ball games to win the game,” Lee said. “Somebody has to step up in a big moment; you have to seize the moment, whether it’s on the mound, on defense or at the plate. And I felt like we were the better team today at seizing the moment. We weren’t flawless, but overall we had a great game.”

Sharpe said he just wanted to embrace the moment.

.“It was different. I was talking about it in the bullpen like, ‘This is weird.’ But once I got through that first inning it was just like me starting again,” Sharpe said. “I just embraced the moment and had a lot of fun.”

Sharpe threw 92 pitches, including 61 for strikes. He walked one and struck out four while giving up just three hits.

“I was just pounding the zone. I was fastball, changeup, I believe for the first four or five innings, and then later in the game, I found my curveball,” Sharpe said. “So I was using a three-pitch mix for about three innings. I was locating my fastball, and it was moving like usual, and I just trusted my defense to make some great plays behind me.”

No. 10 Seminoles pull away late in series opener
Post your comments!