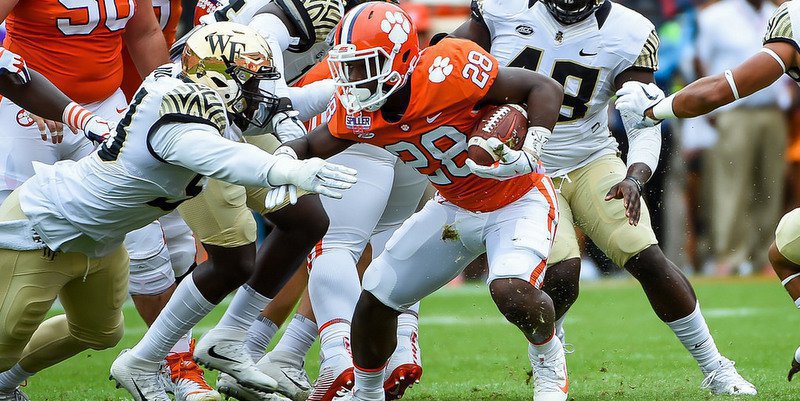 Tavien Feaster and Travis Etienne are a clear 1-2 in the backfield, but all four running backs have a nose for the end zone.

A quick start and dominating defense gave the appearance of a runaway performance over Wake Forest, but the next three-plus quarters gave the Tigers some teaching moments going into the second half of the scheduled slate.

After a second look at the game, here’s how the Tigers grade:

This is a tough game to judge. The starting quarterback exits early. The matchup is versus a solid Wake Forest defense. The early success showcased what the Clemson offense is capable of, and also makes the 28 points feel underwhelming.

One area where Kelly Bryant has struggled at points this season was quick, short throws – outside of the quick tosses on motions – and he showed improvement there Saturday. The problem came in Wake Forest largely containing those plays, but it would’ve been interesting to see if halftime adjustments brought more success in the final 30 minutes. The Deacs were pretty easily out-maneuvered on this pass to Hunter Renfrow that helped setup a TD on Bryant’s last drive:

In the few downfield throws, Bryant connected on some big plays, but the clip above was the only chunk passing play after the first quarter. On the first TD (video below), Feaster is motioned over to help pick up the blitzer and gives Bryant just enough time for the TD (two separate clips below):

The two turnovers were largely on Bryant, where he should’ve protected the ball and taken the lost yardage on the second-quarter fumble and a better decision in the opening third-quarter drive avoids the interception. It was an alert play by the Wake Forest DB to drop back to pick it off, but the best-case scenario on the throw was an incompletion:

After Bryant’s ankle injury, ESPN’s telecast questioned how long he could sustain the number of rushes per game he’s averaged. In the game, he ran the ball every 5.5 plays, which was actually down from his rushes per snap in the previous five games (3.9). Clemson co-offensive coordinator Tony Elliott said just last week that they are keeping Bryant’s carry count in mind. But they also know how dynamic Bryant on the run can make the offense. There’s no question that Bryant on the run has given the offense another edge and must be a factor at some level.

Before taking a peek at the backup QBs, the running backs did have some more room to run than at Virginia Tech, but similar to the passing game, big plays weren’t there as the game went on. The Tigers didn’t have a single run chunk play (10-plus yards) over the final 25 minutes. Once again, freshman Travis Etienne led the way in rushing (15 carries for 67 yards) and not coincidentally, had the longest run (20). Tavien Feaster looked strong too at points, but was largely contained. Feaster and Etienne are the clear 1-2 in terms of touches, but Adam Choice performed with his opportunity on the goalline for the TD – similar to C.J. Fuller at Virginia Tech. Clemson has four backs who can find their way into the endzone around the goalline, which is an area where Bryant’s running load can be lightened.

At receiver, Renfrow was steady on third down again, where he now has 12 catches for 101 yards and 10 conversions this season. Tee Higgins saw his most targets with four for 39 yards – delivering quite the blow to a defender on one of them. Cain’s touchdown showed a flash of what was expected preseason, and although he had a drop over middle with Bryant out, he was in position for another touchdown later that backup QB Zerrick Cooper missed him on. The more opportunities Cain’s the way the better moving forward, but young receivers at the position (Diondre Overton and Higgins) have proven their need for snaps too.

Saturday was the first real pressure situation for the backup QBs and it brought some results that shouldn’t be read into all that much.

Yes, Cooper short-armed the above throw and another, but he’s been lauded as having a strong arm and it’s likely more technique than anything with a young QB. He worked his way into the No. 2 spot for a reason and will have more opportunities down the road. Hunter Johnson was 5-for-5 passing, hitting his first read quickly on those throws. Clemson coach Dabo Swinney said Sunday night that Johnson changed some run calls into pass calls, which moved the chains and is another impressive part of his day. The run-pass option TD to Cannon Smith over the middle was smooth:

Again, it’s a weird game to judge given the circumstances, but there was more good than bad and that was reflected on the scoreboard.

Numbers to know: 3 – Chunk plays (pass of 15+, run of 10+ yards) over the final three quarters after eight in the first quarter. 11 – Different Clemson players touched the ball in Clemson’s first three drives, racking up 206 yards, going 5-of-6 on third down and scoring 14 points. 0 – Conversions on third-and-long (9+ yards) in five tries.

Given how consistent Clemson is defensively, the offense usually draws the nitpicking in grades and assessments. There just hasn’t been much to pick apart on this side of the ball. While the 14 points surrendered weren’t all on the Tigers’ first-team group, the unit as a whole did earn its lowest grade of the season.

Clemson prepared for four-year starting QB John Wolford and faced Kendall Hinton, and that certainly shook things up. Wolford came into the game leading Wake in yards per carry, but Hinton escaped the Tigers’ pressure regularly and kept the Tigers’ sack count to three. As a passer, he warmed up as the game went on, going 2-of-12 on attempts in one stretch and finishing with a 6-of-8 run for 71 yards and two touchdowns.

Some of that did come with Clemson deep into the depth chart, but on Wake’s final scoring drive, it was all starters in by the time they reached the red zone. Demon Deacons tight end Cam Serigne slipped through for an easy TD:

Outside of a few more issues at safety like that one, the coverage was largely in place to make plays – zero interceptions, but a season-high seven pass breakups. Freshman cornerback A.J. Terrell stood out in particular:

Austin Bryant and Dorian O’Daniel continue to impress in the front-seven. Bryant now ranks second in the ACC in tackles for per game (1.75) after two against the Deacs, totaling five solo stops on the day. Kendall Joseph and safeties Isaiah Simons and Tanner Muse helped create some havoc upfront as well, limiting Wake to two scores in four red zone opportunities in a game where Clemson won by just two scores.

This is an elite group that had its dominant moments. There’s no reason to doubt they will bring a more consistent level of play in the regular season’s second half.

Numbers to know: 7 – Pass breakups by Clemson’s secondary, which the most versus a Power 5 opponent since 2012 (South Carolina, 8) and the most versus an ACC team since 2011 (Virginia Tech in ACCCG, 9). 6 – Deacs drives inside the Clemson 50 before scoring their first points and also the number of 3-and-outs in that span. 3.4 – Wake Forest’s yards per pass on third down, where they held to 1-of-5 in third-and-long situations. 61.7 – Over 60 percent of opponent scoring has come in the fourth quarter this season (42 points). Only two touchdowns have been scored in any other period (one in the first and one in the third quarter).

Clemson entered the matchup ranked 120th in special teams efficiency by Football Outsiders, but they put together the best effort of the three phases Saturday.

Redshirt freshman punter Will Spiers pinned three of his four punts inside the Wake Forest 20 – one aided by an acrobatic goalline save from Cornell Powell. Later in the game, Spiers zipped a pass for a first down on a punt-fake to Powell against a return team that wasn’t caught unaware.

Also on the plus side was punt returns, where Ray Ray McCloud averaged 15 yards per return, with a long of 23, and freshman Tee Higgins closed out the win by recovering an onside kick off a deflection.

Alex Spence’s first-quarter 43-yard field goal attempt off the upright brought the Tigers to 1-of-5 on kicks of 40-plus yards this season. I’m no kicking expert, however, it looked like a pretty solid strike, yet unlucky. Clemson's confidence in long-distance kicks will be something to watch, especially with how efficient the fourth down offense has been through six games (7-of-8).