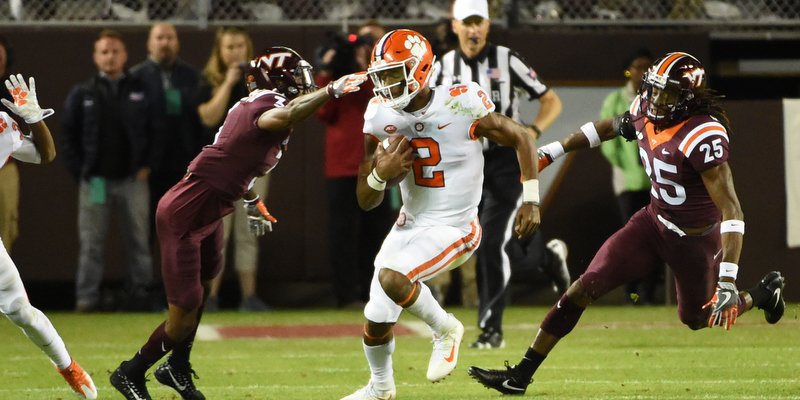 Clemson capped a historic September in terms of ranked wins with an effort more than enough to take a win out of a tough environment.

Clemson coach Dabo Swinney emphasized taking care of the ball in his pregame talk with ESPN and the Kelly Bryant-led offense did just that – committing zero turnovers and making enough plays to pull away against a solid defense and a great defensive mind in Bud Foster.

Game-to-game, Bryant’s improvement in quicker decision-making and use of multiple reads kept some drives moving that stalled against Boston College. This was a second connection in a row to Tavien Feaster, who in two catches for 63 yards easily eclipsed the previous four-game total for Clemson RB receiving (6 for 43 yards):

Better protection gets some credit as well in the offensive effort, but a lot of it was Bryant just making plays when Virginia Tech had defenders in place (three separate clips below):

One of the more impressive series came toward the end of the first half in response to the Hokies’ first score, where Bryant settled down after sailing some throws in previous drives. This run-pass option target to Deon Cain got him in rhythm and he hit Cain again to setup C.J. Fuller barreling into the endzone for a 17-3 lead:

The Hokies made adjustments out of the half to put more pressure on Bryant and made some plays in coverage that few teams left on Clemson's schedule will make. A timely third-quarter turnover set the Tiger offense up and Bryant took over from there – taking six rushes for 42 yards to set up Feaster’s 1-yard TD rush and a 24-3 lead.

I can’t help but see how much better this offense can be, developing as Bryant develops. He flashed some real ability to avoid the rush against a challenging front. He’s hard to handle on designed runs but more so on scrambles – and that’s an area where his vision and decision-making can and will improve too with experience. In the passing game, Bryant’s touch on short, quick throws has been scattershot, but then he shows the ability to lay in pass-after-pass perfectly 20-plus yards downfield.

Looking elsewhere, Bryant accounted for 280 of Clemson’s 332 yards, as Virginia Tech bottled-up the TNT 1-2 punch of Feaster and Travis Etienne on the ground, but Feaster’s breakout in the passing game is a major plus for the RB group in this offense. The receiver corps met their toughest challenge of the young season and made a few plays, but had opportunities for more.

Overall, there's certainly area for improvement going forward, but there's a lot to like as well.

Numbers to know: 21 – Clemson’s pass attempts, which was its lowest total since playing through the rainy and windy conditions in the 24-22 win over Notre Dame (also 21). 38.2 – Clemson’s average starting field position. 0 – Turnovers in road games this season, both versus top-15 opponents. The Tigers ranked 89th nationally in turnovers lost in road/neutral games last season (12).

Virginia Tech schemes about as well any team Clemson will face this season and Brent Venables’ group was ready for just about everything the Hokies threw at them.

In key moments where momentum could’ve swung the Virginia Tech’s way, the Tiger ‘D’ stepped in to force a turnover – and really could have had more than the three they forced.

All-ACC receiver Cam Phillips had about as quiet a seven catches for 74 yards as possible, where while blanketed all game – senior CB Ryan Carter deserving a lot of credit there – he was targeted 15 times with his longest reception going for 21 yards. Clemson wasn’t going to get beat by Phillips, who totaled 12 catches in 13 targets with 92 yards and a touchdown in last year’s ACC Championship.

Clemson’s front-seven smothered any running game from Hokies QB Josh Jackson, who rushed for 101 yards in his only other start versus a Power 5 program (West Virginia). Jackson was limited to 19 yards gained on six attempts.

Virginia Tech wasn’t allowed to get into any kind of rhythm. They registered one first down in the first quarter and didn’t hit a play of double-digit yards until their sixth drive. En route to trailing 31-10, Justin Fuente’s side started 2-of-12 on third down, and all three turnovers came in early down-and-distance situations. The lone touchdown scored on Clemson's first-team unit was aided by a punt return inside the Tigers' three-yard line.

Individually, Dorian O’Daniel and Austin Bryant jump out the most with a second look at the performance. O’Daniel’s ability to read-and-react and made tackles in the open field sets him apart at this level, and then he can do some work with the ball in his hands too:

Bryant showed off his versatility by covering a tight end split out wide and blowing up a screen...

…and stated his case for WRU here, on his second athletic try at an interception in three plays.

There were a few busts here and there in the secondary that may get exposed against a more skilled quarterback, but as a whole, this was another masterpiece from Venables and his ultra-talented defensive unit.

Numbers to know: 46.7 – Virginia Tech receiver Cam Phillips’ catch rate on 15 targets. 2 – Virginia Tech red zone opportunities (scoring only on one), the lowest total versus an FBS foe in Justin Fuente’s two seasons at Virginia Tech. 3 – Turnovers forced after Virginia Tech had only two turnovers in their first four games.

On the plus side, a Hokies fake field goal was easily contained at a critical point in the game, Alex Spence knocked through a chip-shot, first-career field goal (23 yards), Virginia Tech's kickoff return game was largely contained and Clemson’s return game didn’t commit any turnovers.

On the minus side, Spence also mixed in his first FG miss wide right (42 yards), and a redshirt freshman punter in Will Spiers went through the ups and downs of a redshirt freshman punter. After out-punting his coverage unit a few times versus BC – he was clearly looking to give his group some time to cover and that resulted in giving up field position without giving up long returns. Then a Spiers mis-hit plus great hustle by Virginia Tech’s Greg Stroman to field a 43-yard return the run set up the Hokies’ lone TD with the game close. Later in the game, Clemson tried something different with lefty Christian Groomes hitting a low line-drive seemingly aimed for rolling through the endzone – but went out of bounds.

It wasn’t the strongest effort from this phase of the game, but up against a solid special teams unit top-to-bottom, it certainly could’ve been worse in terms of game-changing plays.

Numbers to know: 16.7 – Touchback percentage on kickoffs since Greg Huegel’s injury, which was at 47.6 percent beforehand. 1 – One Spiers punt inside the 20 in the last two games, out of 13 attempts, after starting with seven inside the 20 in his first 11 tries.