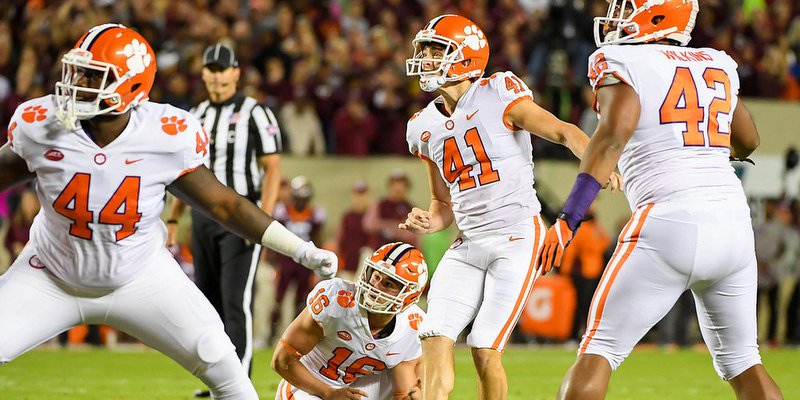 Football season starts today. At least from a media perspective.

As you read this the Clemson media heads up to The Reserve for Clemson head coach Dabo Swinney’s annual media golf outing. With that in mind, the last edition of our season outlook is here with a look at special teams.

1. One of the more interesting elements of the preseason depth chart is Alex Spence and Greg Huegel being listed as co-starters. We saw a mini-exhibition of Huegel’s ability in the spring game coming off of a torn ACL suffered in practice last season. Is it a given he takes over come fall camp or will Spence (or anybody else) challenge for that job?

Rink: Precedent for starting kickers returning from a torn ACL - except for ones that live in infamy - don’t immediately come to mind, but by all accounts, Huegel’s recovery has been quick and he’s jumped right back into the mix.

Last season he didn’t really have time to get in a groove, going 1-for-3 on kicks of 40-plus yards in three games with a career-long of 49 before the fateful injury. As a sophomore, the Blythewood product was solid from 40-plus, hitting 5-of-7 with a long of 47. Back to form, he’s a solid option for 2018.

Lost in a forgettable New Orleans night this January, Alex Spence finished his junior campaign strong by going 2-for-2 with a long of 44 yards as Clemson’s only scoring offense in the Playoff semifinal. He made seven of his final eight attempts after a 2-of-6 start with a long of 46 yards.

Dabo Swinney seems pretty excited about the group going into the spring, and adding B.T. Potter come August, there sure seems to be the feel of a real competition to watch.

David Hood: I read one national publication recently that stated Clemson’s special teams are one of the team’s weaknesses heading into the season. I think this group might actually be a strength and competition is a big part of that.

Spence took over after Huegel’ injury last fall and it took him time to get in a groove. He was stellar all spring and I expect this competition to last well into fall camp. Add Potter into the mix and this should be a good group.

Nikki Hood:If Greg Huegel is 100-percent healthy coming out of fall camp, it will take a great effort by either Alex Spence or freshman B.T. Potter to unseat him as the starting kicker.

Huegel has made big kicks and big games and that experience will give the advantage, despite Spence coming on towards the end of last season. However, don’t count out Potter who has a big leg and has hit from 60-plus in practice.

2. Clemson’s metrics on special teams last season were not good: No. 84 on ESPN and No. 114 on Football Outsiders. What are the biggest areas of needed improvement for this third phase of the game?

Rink: With metrics that low, there are definitely improvements to make across the board, but two to watch come in the punt and return game.

Football Study Hall pegged Clemson for only a 43.7 percent success rate on punts, which ranked 122nd nationally. The Tigers ranked 96th in net punting (36.6 yards) and 78th in yards per punt (40.6). Working in part to turn around those numbers is rising redshirt sophomore and returning punter Will Spiers, who earned team specialist of the year honors last season. There was some discussion from Swinney about Carson King challenging him during spring ball, but Spiers emerged in the top spot on the preseason depth chart.

Elsewhere, it’s nothing new but some more punch to the kick return game could give Clemson a boost. The Tigers finished 92nd or worse in kick return success rate for the second time in three seasons and are still seeking its first touchdown there since 2011. Of course, the new fair catch-kickoff rule will add an interesting decision for teams/players this season, as many may just take the ball at the 25 instead of risking the lost field position. However, Clemson has the playmakers to open up some games here.

David Hood: When Bradley Pinion was a Tiger we saw how a big leg in the punt game could change the complexion of a game. Pinion constantly flipped the field and teams were having to drive the length of the field against the Clemson defense without making a mistake. That didn’t happen last season.

Nikki Hood: The new kickoff rule will change the way teams approach kickoffs, so I’m sure we will really know what to expect until a few weeks into the season. However, Clemson’s kickoff coverage has been very good over the last two seasons.

For me, kickoff return and punting are two of Clemson’s biggest question marks coming into the season. Will Spiers was great at times, but was also inconsistent at many times. He has to find that consistency in order for that to be a weapon in the Tigers’ arsenal. With Clemson’s defense, it’s imperative that Spiers be able to flip the field.

Can Clemson find a spark in kick return with Amari Rodgers, Travis Etienne or Derion Kendrick? They’re all athletic enough and have the quickness and speed, but do they have the feel it takes to be a great returner?

3. Ray Ray McCloud emerged as one of the top punt returners in college football last season. Who can step in there and make an impact?

David Hood: Amari Rodgers. He told us that he worked with NFL wide receiver Nelson Agholor during the spring, and Agholor implored Rodgers to run more North-South and make one cut instead of running East-West and looking for room. The coaches - especially Jeff Scott - told us late in the spring that Rodgers was going to make an impact in the return game. Look for freshman Derion Kendrick to get touches there as well.

Rink: Rodgers looks like the favorite to fill McCloud’s receiver and returner starting roles and I’m intrigued by seeing his role increase in both spots. Maybe more an option for kick returns, Derion Kendrick could be worth a look here too.

Nikki Hood: Like Brandon and David said, Amari Rodgers is the guy I think can take over and be a star in the return game. He has all the tools, but more importantly he has the desire and the want to to be great.