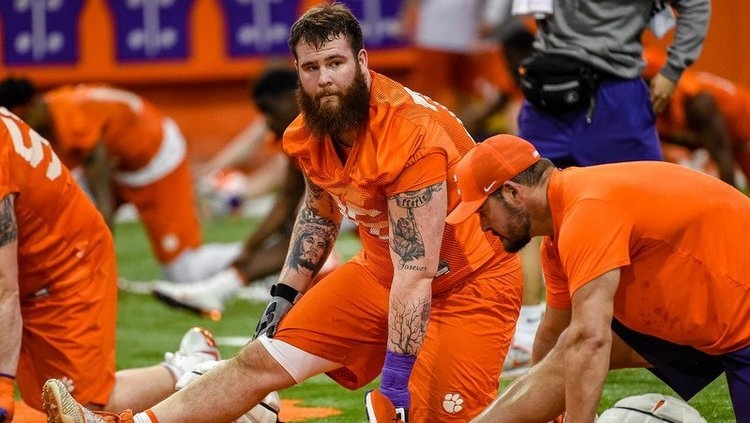 Pollard says he has new mindset heading into 2019

CLEMSON – Sean Pollard played a few snaps at center late in Clemson’s win over Notre Dame in the Cotton Bowl in Dallas, and when he was asked about the position change after the game he smiled and said, “Why not?”

Pollard enters 2019 having previously played 1,602 snaps over 40 games (23 starts) in his career. He’s started games at right tackle and right guard, but a permanent move to center seems likely heading into next season.

Pollard told TigerNet Monday night that he told offensive line coach Robbie Caldwell that he wanted to help any way he can, even if it meant a move to center.

“Just depth…we needed some guys, and I told Coach (Robbie) Caldwell that I could do it,” Pollard said. “He didn’t believe me, so I started playing it and they started believing me. It’s been fun. It’s just the next man up mentality for me, and I am just going to do whatever the coaches tell me to do.”

“It was good. The offense had a good showing,” Pollard said. “It’s really nice because every day we come out we can see our defense improving. That scrimmage was fun because we just got to go against some really great competition.”

Playing center at Clemson means making split-second blocking calls at the line of scrimmage, something Pollard has to get used to but says his learning curve is accelerated because of Brent Venables’ exotic defenses.

“Coach Venables will show you everything in his book at practice,” Pollard said. “We see everything on our practice field, and it really makes you become at veteran real quick at a position that you are new at.”

He then said that changing positions has led to a different attitude.

“I am just more excited overall for this season,” Pollard said. “It’s like a whole change in my mood. I can be down sometimes and feel sorry for myself. This spring I told myself that I was going to have a better mentality and a better mood overall. I just try to work on that every day. Granted I am at a new position, and I don’t always have the best days every day, but I just try to have a good mood and overall, it’s just a fresh new start. New position and a new Sean.”

Swinney talks about the reason for Clemson RB transfer
Post your comments!