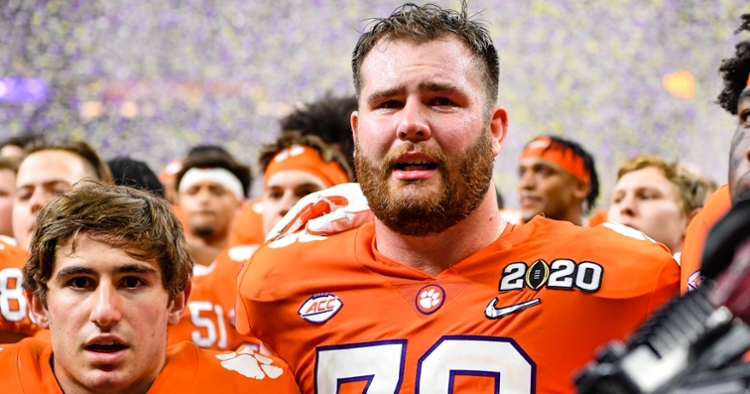 Pollard shows emotion after the loss to LSU.

Sean Pollard received one of Dabo Swinney’s Godwinks at the perfect time last Saturday, a message from his late grandmother letting him know that everything is going to be just fine.

The 6-5, 322-pound Pollard was named second-team All-Atlantic Coast Conference as a junior and senior at left guard and center, respectively. He watched all of last week’s draft hoping to hear his name called, but when the seventh and final round came and went he knew God had other plans.

Those plans included the Baltimore Ravens, who quickly reached out to Pollard’s agent and signed the North Carolina native to an undrafted free agent contract.

“I watched the entire draft, just to be curious. I got a call from my agent saying that the Ravens want me as an undrafted free agent,” Pollard said. “So I had an idea of a team that wanted me at least. So I was just hoping that my name would be called, but I always know that God has a plan, so I think He put me in the best situation.”

The dictionary describes a Godwink as an event or personal experience, often identified as coincidence, so astonishing that it is seen as a sign of divine intervention, especially when perceived as the answer to a prayer. Swinney is a big believer in Godwinks, and now Pollard has experienced one of his own.

“You know how Coach Swinney is always talking about Godwinks, and I believe in that to a certain extent,” Pollard said. “But this one is pretty relevant. We had a low country boil for some members of my family, and we were just standing in the yard. I had just gotten off the phone with my agent, saying that we made a deal with the Ravens. And then all of the cardinals and blue jays that had been in my yard all day started going crazy.”

Pollard’s grandmother, Alma Cortes, was killed in a tragic car accident near her home in Pineville, NC, five years ago. A decorated City of Miami police officer, Cortes was Pollard’s rock throughout his life. Cortes was returning home when another driver swerved into her lane and hit her car head-on.

Pollard later got tattoos on his arm dedicated to her memory.

“My whole arm is about her. She was killed in a car accident about five miles from my house while I was at school. I wanted to get a tattoo to honor her,” Pollard said. “When I looked at her Facebook page, the last thing she posted was 'Your wings were ready, but my heart was not.’ I knew then that I was for sure getting that.”

His grandmother let him know she was watching over him last Saturday.

“Anybody that knows my grandmother knows that when she was alive, she always fed the birds,” Pollard said. “Dad was like, 'Yes, nanny, he is going to be a Raven.' And then all of the birds got quiet after that. That was a really big Godwink. That was pretty cool.”

Pollard said another coincidence is that he’s already met Ravens head coach John Harbaugh. The meeting happened when Pollard was a sophomore in high school and traveled to Baltimore to the Under Armour headquarters.

“I went there one of the Under Armour camps, and he was one of the guest speakers,” Pollard said. “He came out and hung with us. He came out to the headquarters and gave us a speech and talked to us about hard work and things like that. I didn't even think that he would be my head coach one day - I was too worried about getting signed.”

Pollard said that he is looking forward to getting back to live work and perhaps one day blocking for Raven quarterback Lamar Jackson.

“It is very similar to what I have had to block for in college. With Deshaun (Watson) and Kelly (Bryant) and even Trevor (Lawrence),” Pollard said. “Of course, none of them are Lamar Jackson. None of them are. But it will be a very similar feel with a quarterback that you know if you give him time, he is either going to throw it down the field or take off running. You never know. That is exciting.”