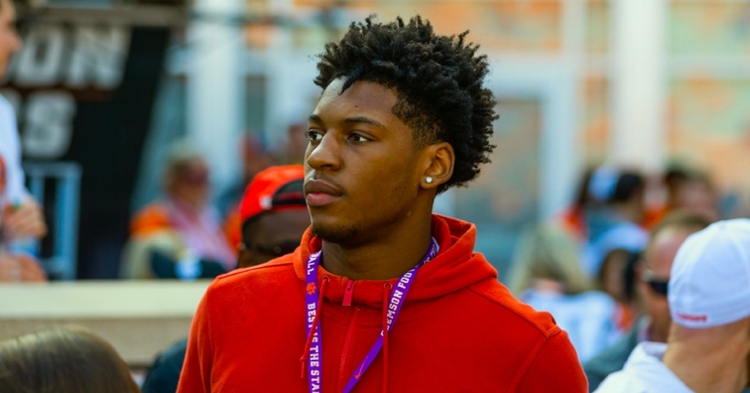 Patterson visited Clemson for the win over Wake Forest

Clemson and South Carolina are set to do battle again Tuesday, this time for one of the prized defensive end prospects in the state of North Carolina.

Zaire Patterson (6-6, 225) of Winston-Salem (NC) Prep is expected to commit to one of those two schools (North Carolina is in the mix, but this is seen as a Palmetto State battle) at 5 p.m. Tuesday on social media. Patterson released a top eight of Clemson, South Carolina, North Carolina, Alabama, Georgia, Kentucky, Notre Dame, and Oklahoma in April, but he is ready to make a decision.

His head coach, DeRon Middleton, said both schools have done their job on the recruiting trail.

“With South Carolina, most definitely the relationship he built with the staff,” Coach Middleton said. “Will Muschamp and his staff are great. They did a great job recruiting, talking to him, and whenever we came they just made us feel like he was part of the team. The relationship they’ve built with him is amazing. With Clemson, similar, same thing, they’ve got a great relationship with him too. They were great with him. (Mike) Reed and (Lemanski) Hall and (Brent) Venables were great with him.”

Patterson has been to both schools multiple times. But with visits on hold for now, both staffs had to resort to the newfangled social distancing version of recruiting.

Middleton said both schools laid out for Patterson in great detail how he would be used in their defense.

“South Carolina told him he would play the Buck,” Middleton said. “He would be very versatile, he would be able to do everything he’s been doing as far as drop end and being able to rush the passer. And Clemson, similar things. He has the a similar skill set of the kid that just got drafted (Isaiah Simmons), and they want him to come in and play for them, but also they want to get to the passer.”

Rushing the passer is definitely a strength of Patterson’s. He’s had 25 sacks over the last two seasons. But he also has the ability to drop back in coverage, proven by his four picks last season.

Academics were a big factor in the recruiting process for Patterson. Middleton said he probably will graduate No. 1 in his class. And he wants to major not just in engineering, but in space engineering. And another major factor in the decision-making process was his family.

“I don’t know what made the difference, but I will tell you what is going to make the difference,” Middleton said. “His mother. His mother, his family, his brothers. They want the safest spot for him and where he’s going to get what he deserves as far as school and academics. She’s like the last straw.”

One of the surprising developments in Patterson’s recruiting was his decision to cut North Carolina. The Tar Heels have put together a highly regarded 2021 class and are doing very well in their own state. Middleton suggests their own success worked against the Tar Heels in this case.

“I would say because they did so well in state, and I believe because he knows a lot of kids,” Middleton said. “He’s a kid that wants to be different. He wants to stand out, he wants to grow on his own. He wants to make his own name. He doesn’t want to be caught up with this group of North Carolina kids and we did it this way. I was as surprised as you. They were number one, but I was wrong. I’m still out of the loop like everybody else.”

Patterson is ranked as the No. 18 weakside defensive end nationally in the 247Sports Composite, and the No. 16 prospect in North Carolina. Last season he had 109 tackles with 27 tackles for loss, 11 sacks, 9 forced fumbles and 4 interceptions.