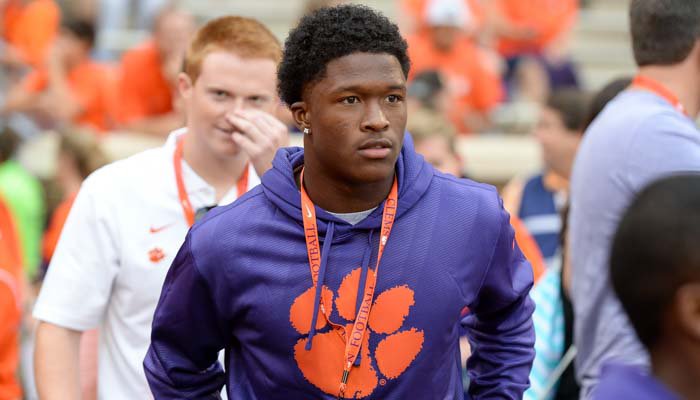 The rumors of Chad Morris

Once Morris was named head coach at SMU, TigerNet reached out to several members of Clemson’s 2015 class and highly touted prospects for the 2016 cycle to ask their thoughts on the change.

View Full Profile , who said the change doesn’t affect his commitment to the Tigers.

“It absolutely doesn't. I love Coach Morris,” Williams told TigerNet Monday evening. “He's recruited me a little bit along with Coach [Jeff] Scott and been to my school multiple times. I have a really good relationship with him and he deserves that SMU job. He's a head coach and has all of the skills to be a great one. I'm looking forward to seeing what he does there and I'm really happy for him, but it doesn't change my commitment status at all. I told some other people that I'm committed to the university, not necessarily just the coaching staff. My commitment is still 100-percent, just like it was before. I'm still really excited to be a Tiger and I can't wait to get up there.”

Jeff Scott
Asst. Coach (WR) / Recruiting Coord.
View Full Profile is ready for the next step of becoming a coordinator.

“I think Coach Scott is prepared and he's ready,” Williams said. “He's won every place that he's been - in high school and at Clemson. He's done an incredible job recruiting at Clemson and coaching receivers. He's had some of the best receivers come out of Clemson the last few years, more than any other school. He's been successful at everything he does. He's been around coaching his whole life. I think he's ready to be a coordinator and I think he would be a great fit at Clemson. He wouldn't have change systems and has a lot of up and coming players like Deshaun Watson and Artavis Scott who have learned the system. I really think that if they gave Coach Scott the job, it would be a great hire. I know that I Coach Swinney will get the right man in there and I look forward to seeing who it is.”

TigerNet spoke with Deon Cain’s mother Monday evening and she said that Morris’ departure does not affect Cain’s commitment to Clemson at all.

“No sir, it doesn't affect anything at all. I think he's a very Godly man and he has worked hard and I know God has a plan and that's what He was telling Coach Morris to do. It's a great opportunity for him and I wish him the best. It doesn't not affect anything as far as my recruitment is concerned. As long as Coach Swinney and Coach [Robbie] Caldwell are there, I'll be happy.”

“Well it was known that he was one of the best offensive coordinators in the country, so it was a matter of time for him to go. I really like Coach Morris. I will continue to stay in touch with him and wish him nothing but the best, but I am 100-percent committed to Clemson and I’m not leaving or searching for anything else. Coach Swinney told me this would happen and assured me he wasn’t going to change the offense, so I shouldn’t worry about him hiring an offensive coordinator that runs the wing-t.”

“I think it’s a good move for Coach Morris, but yes, it changes things because I know he made Clemson wide receivers great by finding ways to give them the ball and that’s what made you want to go to Clemson. Now, since he’s gone, that changes things because there aren’t many offensive coordinators that can do what he does. I’m very interested to see who Clemson hires.

“It’s a great milestone in Coach Morris’ life to get what he has dreamed of, but there’s no impact on me and we’ll see how it turns out. I’m still attending Clemson.”

It doesn't change things at all. They have great coaches and I think it will be the same for me. We are ALL IN.”

“Jake is actually excited about the future with tons of existing talent to go along with his recruiting class. He doesn’t feel the offense will be changed too much but the train will simply keep rolling. He got a chance to meet many of his teammates over the weekend and is really just excited to get in there next month and help be a part of the team.”

“I wish him the best. It shouldn't change much as long as Coach Dabo and Coach Caldwell are there.”

“I am happy for him if he feels like that’s the right decision. I totally understand and it doesn’t change anything for my commitment. I’m still solid.”

“No it doesn't change anything.”