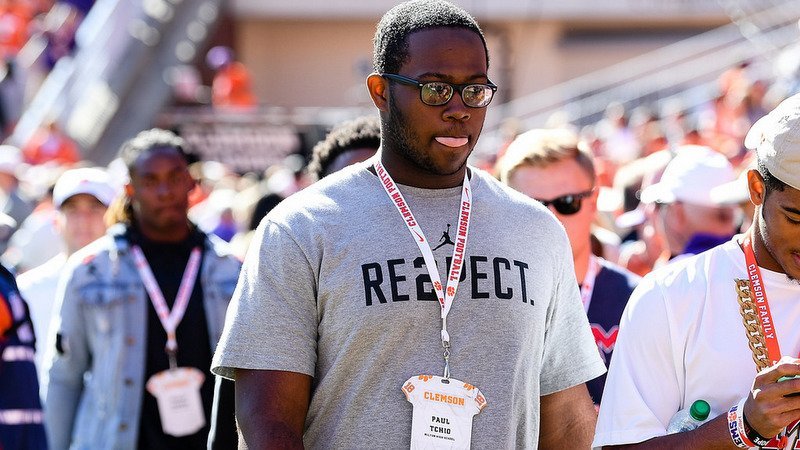 Paul Tchio is back for another visit

While last weekend was filled with 2019 official visitors, this weekend’s rivalry matchup against South Carolina will jumpstart the Clemson coaching staff’s 2020 recruiting efforts.

This weekend could be just as big as last weekend with a pair of five-star prospects expected to be in attendance for Clemson’s 7 p.m. kickoff against South Carolina.

“This is important because DJ will bring along his dad,” St. John Bosco coach Terry Bullock said. “Big Dave has never been to Clemson, and I know that he wants to show his dad why Clemson is so special and why he loves it. It will be good to spend time with the coaches and let him see everything and everybody. That is one of the other reasons we really wanted to make this happen.”

Uiagalelei was supposed to be on hand for Clemson’s win over N.C. State but a missed flight threw a wrench in those plans.

“We got LAX with about 30 minutes to spare, but then we got bogged down inside the airport. We were running for the gate and they shut the door to the plane just as we came running up. They told us once they close the door they can’t re-open it. We missed it by seconds, and D.J. was really bummed about it,” Bullock said of the group’s previous plans.

The top-ranked player in the ESPNJR 300, Bryan Bresee is expected to be on hand as well. Bresee, a defensive end out Damascus (MD) has 25 offers from all of the major players in college football including Clemson, Alabama, Michigan, Georgia and others.

Below is a list of anticipated visitors, but keep in mind that list is ever changing and there could be additional visitors added to the slate.

Also below are some of the predictions from Clemson commits for how they see the Palmetto Bowl playing out.

DL Logan Cash – “I think the score will around 45-10 Clemson. Clemson’s defense should be able to hold them out pretty good and the offense will score pretty easily.”

Linebacker Kane Patterson - 31-3 Clemson. “The defense is playing lights out right now. The offense was a little off last week so I expect them to pour it on this week. I think South Carolina might get a late field goal. Lastly, it’s in Death Valley.”

Wide receiver Frank Ladson - 49-6 Clemson. “Rival game Clemson dominates from the beginning at home at night in the valley.”

Linebacker Bryton Constantin - 35-10 Clemson. “Clemson’s defense is stout and always will be. I think their offense will click better than ever in this state rivalry and they will roll over USC.”

Tight end Davis Allen - 42-10 Clemson. “I say the offense gets rolling early in the game and the defense dominates as always.”