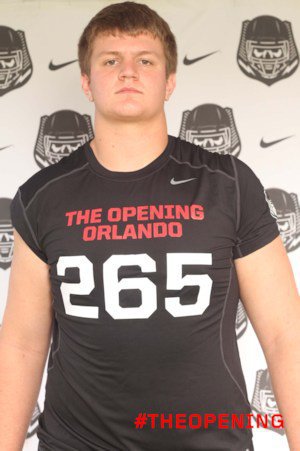 Vinson is Clemson's third commitment on the offensive line for 2017

Saturday’s Junior Day ended with a commitment from a 4-star offensive lineman, and the success continued Sunday when the Clemson coaching staff picked up a verbal from one of 2017’s priority targets.

Four-star offensive lineman Blake Vinson, who was in Clemson Saturday, called recruiter Jeff Scott Sunday afternoon with the news that he didn’t want to wait any longer – he was ready to be a Tiger. He also said he knows that there isn’t another school in the country that can offer what Clemson has to offer.

“I visited yesterday for the junior day with my parents and my family and on the ride home last night we were just talking about everything and the tour,” Vinson told TigerNet a few minutes after the commitment. “We realized that there's not going to be another school that has everything I'm looking for like Clemson does, so I didn't see any reason to drag this out any longer. I just wanted to pull the trigger and end my recruiting process today. They're (his family) 100-percent on board. They've really helped me out in this decision. They're all really excited.

Once the family arrived home, the Citra (FL) Lake Marion product called Scott with the news.

“I called Coach (Jeff) Scott and he had me call Coach (Dabo) Swinney. He told Coach Swinney that I was going to call him, and I talked to him for a while, and then I made the commitment,” Vinson said. “He was pretty excited. He was yelling and stuff. He said that it made his week and how I embodied everything they're looking for in a prospect and what their program is about. He just told me how I was a priority for them. It's really exciting to know that I'll be a part of that team and that they just played for the national championship, and I'm a part of their recruiting class the year after. They said that I was a priority for them. It's great.”

Vinson thinks the Tigers are in line to have a great class.

“Right now it's Matt Bockhorst, Noah DeHond and I who have committed on the o-line,” he said. “I think both of them are very good players and I got to know both of them very well this weekend. I'm really excited to go to school and play with them.”

He held offers from Alabama, Auburn, Florida, Georgia, LSU, Penn State, South Carolina, Tennessee, and others but it was his relationship with the coaches that put Clemson over the top.

“It was just the interaction with the coaches. They are all good, Christian guys who talked about their faith a lot and that's something I'm really big on,” he said. “I just realized that there's not going to be another place like Clemson that fits everything that I'm looking for. I have a really good relationship with Coach (Robbie) Caldwell. He actually coached a guy that I workout with and train with. He coached him four years at Vanderbilt. I've known Coach Caldwell for a while through him, and I talk to him often through Twitter, and I call him a lot, so we have a very good relationship.”

The 6-5, 285-pounder says the Tigers are getting an aggressive player that can play any position, even though the Tigers have recruited him as a tackle.

“Most people say that I'm aggressive on the field, and I have the ability to finish blocks,” Vinson said. “I don't stop until the whistle blows. I'm pretty athletic for an offensive lineman.”