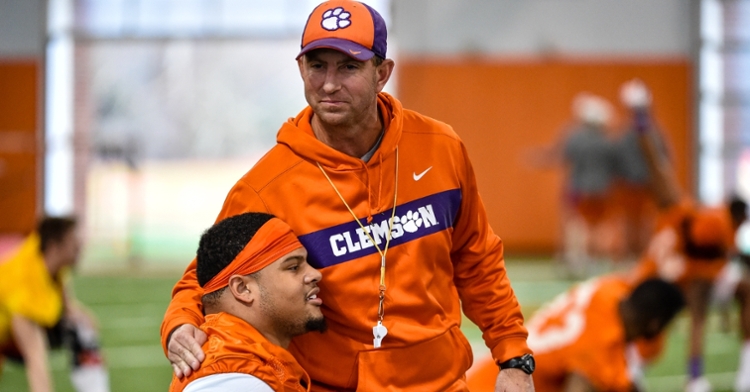 CLEMSON – The second day in pads was a good one for the Clemson football team.

The Tigers practiced for 2 1/2 hours in the indoor practice facility Monday afternoon, the first day of live work.

“Second day in full pads. We got some work Saturday and then today was the first day of live work,” head coach Dabo Swinney said. “We did two periods of live, one in the beginning and then we finished practice with what we call a rapid-fire live drill. It was good to see them put it all together. We have got a lot going on, a lot of installation and a lot of corrections that we are making, but I am pleased with it. This has been good work and I am pleased with it. Great work ethic. Guys have got great energy coming out here. As I said the other day, it's a good looking team.”

There are still a few players battling injuries.

“We have a few guys. especially at corner right now, that are banged up. (Andrew) Booth is getting better, waiting on him,” Swinney said. “DK (Derion Kendrick) kind of strained his (hamstring), so he was out today. Mario (Goodrich) is nursing his ankle. We will take it slow with him the first half (of spring practice) and hopefully, he will be ready to go the second half or sooner. But it's been good.”

Swinney said he is starting to see some players stand out.

“Today we had some guys flash, a few guys that I was hoping we would see make some improvement. I love seeing that,” Swinney said. “Just Saturday, for example, I think Jordan Williams had his best practice I've seen since he's been here. It's amazing what a little competition will do. He really was a guy that, to me, jumped out. I am pleased with some of the guys that I've seen in the secondary and at safety. We have got some guys that are moving around very well right there.

“Mike Jones is getting a lot of work and he's doing a nice job. All of those young guys, I am incredibly pleased with. That second group of offensive line guys, we have a long way to go there mentally. They have a lot going on. We see 52 blitzes every day in practice, so it's not like we are patient on defense for the second OL. But that is good for them. It's what makes us better. And BT Potter hasn't missed a kick.”

Swinney also spent time keeping tabs on his former players who worked out at the NFL Scouting Combine this past weekend.

"They all did what I thought they'd do. I think for some reason people thought A.J. Terrell couldn't run or something like that, but no he can run. He really helped himself,” Swinney said. “Tee's (hamstring) wasn't quite where it needed to be. He'll be ready here soon and do great. I think they all did well in their interviews. Tremayne Anchrum and John Simpson did a nice job. So did K'Von. - K'Von is K'von, he crushed it. I think they upgraded Tanner Muse to a 4.41 and not surprised with that.

"And then Isaiah... we all knew, he's just a freak. He's one of the most unique talents you'll see. Him coming back and having another year to develop, he probably would have been a second-round pick last year. Him coming back and becoming a more complete player is amazing. I am sure they will all start rolling in here next week to get ready for our Pro Day.”