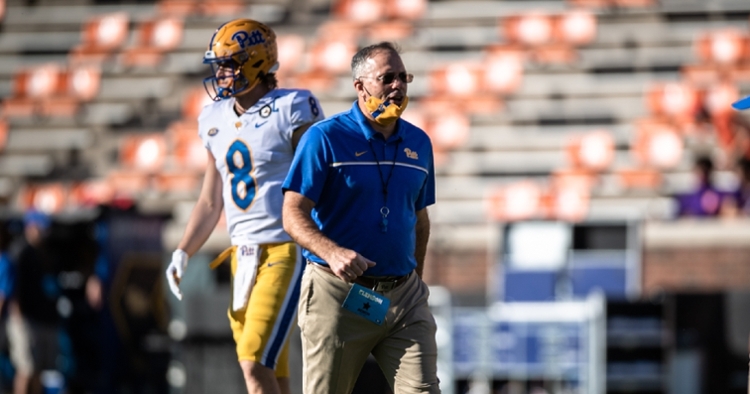 Narduzzi says Clemson will be back in the Playoff. (Photo courtesy ACC)

CLEMSON – Third-ranked Clemson is the gold standard in the ACC, and so when their name comes up on the schedule, teams are anxious to see how they stack up.

Pitt lost to Notre Dame and Miami – both of which are ranked in the top-15 – earlier this season, so head coach Pat Narduzzi wanted to see how they measured up against Clemson. Unfortunately for them, the Panthers had three turnovers in the first quarter, quickly derailing any chance Pitt had at an upset.

Narduzzi told the media after Pitt’s 52-17 loss to Clemson that playing against some of the best teams in the country gives his players and coaches an idea of what needs to be done to succeed at the highest level.

“It definitely is a measuring stick” Narduzzi said during his postgame interview. “Three really good football teams, the ACC is strong and it tells you where you are and what you have to do to get back where you need to be, which is getting to that ACC Championship Game.

“We just - it was more about what we did. They’re a good football team, but we didn’t make plays today, on either side of the ball. Our best play was (Kirk) Christodoulou and his punts, and we didn’t have enough of those either.”

Narduzzi said his team got off to bad start trailing 31-0 early in the game, but that didn’t take away from anything Clemson was able to do.

“First of all, give Clemson credit. That’s a good football team,” Narduzzi said. “Trevor Lawrence, (Travis) Etienne, they are what they are: great football players. We gave them some short fields early, for sure, with four interceptions, and that’s kind of been the tale against really good football teams - we’ve turned the ball over and not really given ourselves a chance or started slow. But again, give Clemson credit. They probably overwhelmed our offensive line a little bit with having three starters out again today, and we just didn’t get things done. Again, I give them credit.

“Our kids continued to play, they fought hard, it just wasn’t enough. Too hard to make up. No. 3 team in the country, you turn it over four times, you have no shot.”

While the execution certainly wasn’t there for Pitt, Narduzzi said the Panthers aren’t close to where Clemson is in terms of talent.

“I would not say we’re where we need to be, talent-wise, when you look at what Clemson has recruited and Notre Dame has recruited and some of those schools,” he said. “We just have to continue to recruit. That’s kind of where we are right now: we get what we get and we’ll try to develop them as a football staff. And again: I love our kids. I would take our kids any day because they’re going to fight. But everybody’s got a different talent level, and obviously, Clemson’s got unique talent.”

Narduzzi has now coached against Clemson three times. The two previous times were in 2016 and 2018, when the Tigers went on to win a national championship.

How does the 2020 squad compare to the previous two?

“They’re good. They’re going to be in the playoffs,” he said. “I wouldn’t be shocked if they get to the final two. Those other ones are good, too. I’ll tell you what, Trevor Lawrence and that cannon arm he’s got - that one throw, I’ve never seen anybody throw a ball as far as he threw it. I don’t know how long that ball was in the air, but that was one heck of a throw in the third quarter. I mean, I’ve never seen a guy throw the ball that far.”