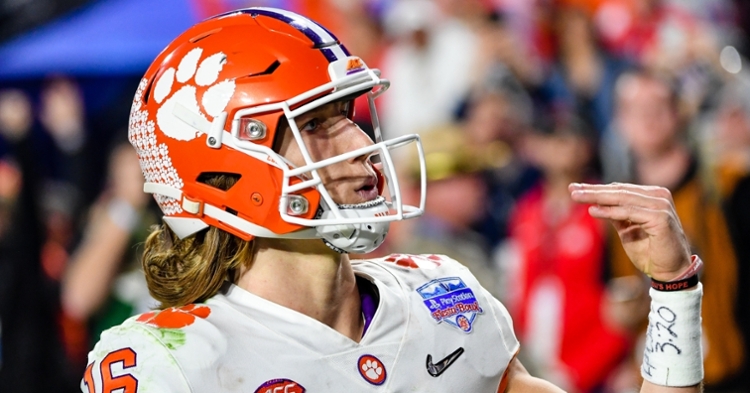 Lawrence gestures to the crowd after his touchdown run.

On a second-quarter third-down play in Saturday’s Fiesta Bowl Lawrence dropped back to pass and was sandwiched by a couple of Ohio State defenders. After the play, Lawrence laid on the turf as Clemson nation held its collective breath.

After a few minutes, Lawrence was able to get up and jog to the sidelines as the fans finally exhaled. Ohio State defensive back Shaun Wade was called for targeting on the play giving the Tigers a first down. Backup quarterback Chase Brice came in for one play but Lawrence trotted back on the field to a round of applause.

From that point on Clemson outscored Ohio State 29-7 and Lawrence led the Tigers in rushing with 107 yards, including a 67-yard touchdown run for the Tigers’ second score.

The hit served as a wake-up call for the Georgia native and the entire Clemson offense.

“Yeah, I think kind of what you said, there's some truth in all that. It was just, they hit me, and I was worried it was my collarbone for a second because I couldn't feel it up there around my shoulder and neck, and my arm just went numb,” Lawrence said. “It was just a really bad stinger.”

As he jogged off the field Lawrence imagined the Buckeyes celebrating because they thought they had knocked him out of the game.

“And then I got kind of -- I was kind of pissed off because I knew they were over there thinking like, all right, we knocked him out,” Lawrence said. “They think had all the momentum, so I was like, all right, I'm just going to pop up, I'm going to run it off, and I was pissed, too, because I thought we were punting, and then it turns out they called targeting and we got a chance to go back out there and we finished and scored on that drive. But I was just like, man, from then on, they thought they had knocked me out. I had a different kind of edge when I got up.”

“No, that's just who he is. I mean, he is a fearless competitor. He has an incredible will to win, which starts with his preparation,” Swinney said. “I mean, when you work so hard at something, you invest so much into something, you're not going to just – you're not going to just give it up, and he prepares relentlessly and just pays the price. All of a sudden – you're going to fight for it. I just saw what I already knew, and that is that he is just an unbelievable competitor and a great, great leader, and he just has a will to win that's special. It really is.

Many experts were predicting during the game that Lawrence wouldn’t be able to continue to take a pounding from the Ohio State defense, but there was Lawrence in the fourth quarter delivering body blows and then finally the knockout punch to the Buckeyes.

“Yeah, he's 6'6", 220 pounds, and he's strong. He's a great runner. He just ran a 67-yard touchdown against Ohio State and ran away from them, so I don't know what else you need to say about that,” Swinney said. “They've got a bunch of dudes that can run on that defense. That's what I've said all year long. He's as confident in his legs as he is his arm, and he's grown into that. But he can move. He can flat-out move. That's really been the case all year. He's really made a lot of big plays with his legs, scrambling around, extending plays, and then also just running it when he needed to.

“But he made some big plays. Had a couple scramble plays last night and obviously the quarterback draw was a huge play for us and kept him honest just enough to set up a few things, but we've got to – we're going to have to play better across the board, again. But it's all about winning the game, and I thought that that was the best part of it. Had to go 94 yards against the best defense in the country to get the lead, and then you've got to stop the No. 1 scoring offense in the country to win it, and that's the way a championship game – Trevor led us down the field, did an amazing job, just in four plays. Super proud of him, and we've got one more to try to go get.”