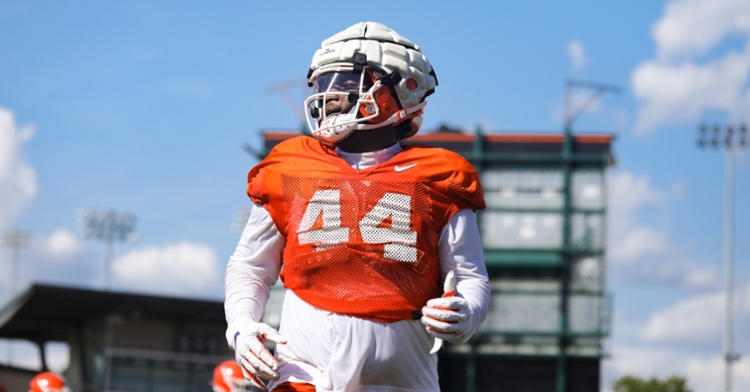 Pinckney is excited about the start of the season (Photo per Clemson athletics).

Fifth-year defensive tackle Nyles Pinckney was sure to carry on the legacy of his teachers in the great Christian Wilkins, Clelin Ferrell, and Austin Bryant. In doing so he discusses how he has brought what his teachers taught him to the new and young Clemson defense throughout fall camp.

"I would say I had a good example when I first came. When I first came I had Christian Wilkins, Carlos Watkins, Clelin (Ferrell), Austin (Bryant), so I had a lot of good examples," Pinckney said this week. "I kind of follow and piggy back off because all of them taught me well at a young age. I feel like that’s why I grew. So, when they come to me I kind of think about how Christian would teach me because every guy needs a different kind of approach. Some guys need the hard staying on them, some guys might need the positive role model support and happy kidding with them. People learn in different ways, so it's a good feeling to know that they can come to me.”

This shouldn’t come as a surprise, considering the amount of talent Pinckney describes seeing throughout the summer and fall camp.

“A lot of them stood out to me. Malcolm Greene, he came in on day one and I was like who is that guy. His energy, and he just comes in and gives that vibe that he wants to be great," he said. "Bryan Bresee, great guy, great player, very athletic. He can work on technique and stuff like that but he's athletic and those guys really stand out to me. There's more guys like Trenton Simpson. He stands out to me but he still has a lot to learn because being on Coach V’s defense isn’t easy. But he's learning and doing the best he can. He's absorbing as much knowledge as he can from everyone, and I feel like those are the guys that really stood out to me."

The learning process comes naturally to many of the younger players according to Pinckney.

“I would say all of them ask a good amount of questions. Even people like Tyler (Davis), he played last year as a freshman and he still has some questions about certain things, so we go back and forth trying to figure things out," he said. "But it's like all of them that ask questions. Ruke (Orhorhoro) has asked me a lot of questions because people know he hasn’t been playing football that long, so he's always asking for different ways to get better and improve his game because he knows he can play. Especially with this kind of year with COVID, because anyone could test positive or feel sick and can't play so he knows he has to step up.”

COVID has seemingly caused for a questionable 2020 season, however the NCAA recently allowed for student athletes to gain an extra year of eligibility, something that Pinckney and others players have expressed their praise and gratitude towards.

“Of course, it's a great opportunity,” Pinckney stated. “We’re very appreciative for the NCAA especially in a year like this because anything could happen. We could start the season and knock on wood, hopefully not, they could cut it short because there's too many cases or something. It's one of those situations I think about here and there. I know I want to go to the next level but I want to put myself in the best position, because I know I can get better each and every day. Especially last year I feel like I didn’t play that well so I'm grateful for my fifth year, and even if I feel like I need another opportunity I got that year to use.”

Clemson opens up this year at Wake Forest at 7:30 p.m on September 12th, and according to Pinckney, there’s no better way to start the season, regardless of the restrictions on fans.

“It's always great to play at night, especially with your brothers. Another thing I can say is that it's kind of like practice. When we practice we bring the energy," he said. "There's no fans out here, it's just us and the coaches so that's how it's got to be then that's how it has to be. We’ll keep it hype and turn up ourselves and keep it between us because at the end of the day, the fans aren't going to play, we are.”