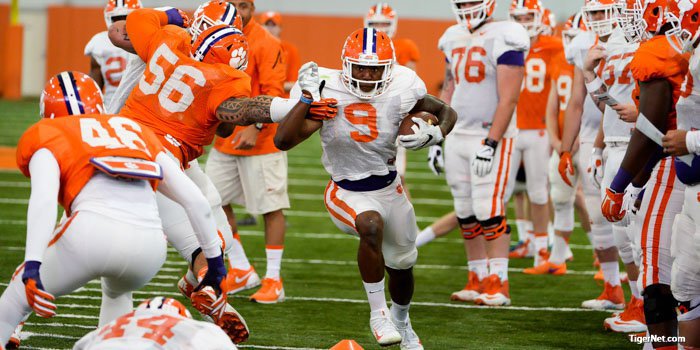 Wayne Gallman drives for yards in the PAW drill

CLEMSON - Most people say that Monday mornings stink, but it doesn’t have too bad of an aroma when it starts out with a physical PAW drill.

The Clemson media was allowed to watch the first five periods of Monday’s practice, one that got off to a little different start than normal. Whenever we walk into the indoor practice facility for stretching, it’s the norm to hear 80’s rock, R&B, hip-hop and sometimes even rap blaring from the speakers. Monday was a little different – you could hear Frank Sinatra’s “I Did It My Way” from the moment you stepped out of the car.

Clemson head coach Dabo Swinney gets to pick some of the music that’s played and the song choice was obviously his. As you looked out of the indoor practice facility and over at the massive football operations center that’s being built, it’s hard to argue with the song choice.

Now to some of the highlights from the short time we were allowed to observe:

*Before the PAW drill, Swinney called out defensive tackle Jabril Robinson and freshman receiver Cornell Powell for a quick game of cornhole. Robinson won it for the defense.

*During the early part of the PAW drill, I was really impressed with the physicality of freshman lineman Sean Pollard. He drove one defender back about ten yards and got a tap on the helmet from offensive lineman Robbie Caldwell. Pollard – to me – is an example of the difference in the program now and a few years ago. Brad Scott used to tell me you recruited a lineman with the hope you could add weight and strength and he could play by his junior season. Pollard might redshirt this season, but he looks like he could play right now. And my guess is he will earn snaps this season.

*I knew Adam Choice could be a physical back, but he looked quicker than I remember during the drill. He doesn’t mind plowing into the line, but at least twice he bounced around a defender without being touched. The second time he got loose, former tight end and current assistant Durrell Barry screamed while signaling touchdown.

*Tyshon Dye was another that was impressive during the drills. We know he’s battled back and ankle injuries during his time at Clemson, but he was using his legs to drive into defenders during the drill. It shows he finally trusts his lower body to get the job done.

*And this running back group is scary because….not only are Gallman, Choice, Dye and C.J. Fuller all quality backs, they’ve added Tavien Feaster. During the drill, Feaster didn’t shy away from contact. On three separate occasions he lowered his pads and slammed into defenders. He doesn’t shy away from contact and his big legs give him the power to drive over guys.

*Towards the end of the PAW drill, Swinney called out individual players for one-on-one battles. The first duo was offensive lineman Jake Fruhmorgen and defensive tackle Nyles Pinckney. Pinckney is strong, and the battle with Fruhmorgen extended into the end zone. Fun to watch.

*I watched Brent Venables and Marion Hobby – who coach the kickoff coverage teams – during the final period we were allowed to watch. They were working on one-on-one battles on the outside, Venables was already in the mood to chew nails before the drills started.

He told us the other night he thought Clemson’s coverage teams were embarrassing last season, and it’s obvious he is doing everything he can to change. He had more than two dozen players lined up for the drills – he wants to find players who want to play – and he was intense.

He was constantly exhorting players to hurry in and out of the drill, and finally, he had enough when freshman defensive back K’Von Wallace caught his ire.

“Hurry, hurry, hurry! We have a million guys out there waiting to get your reps,” he screamed. “Some of these guys want to play. Keep that up and you won’t even get on the bus, 12 (Wallace’s number).”

*We will have more after practice.