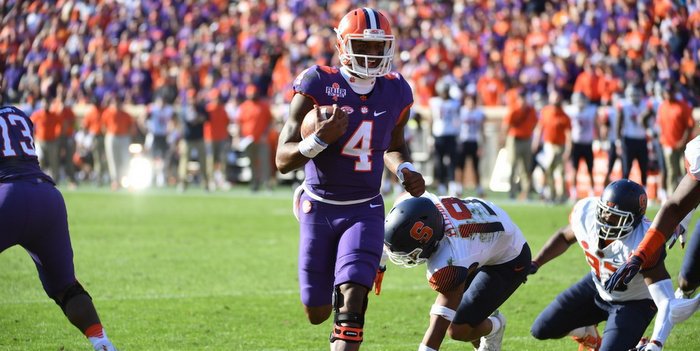 Watson scores an early touchdown for the Tigers

Second-ranked Clemson celebrated Military Appreciation Day by wearing all purple and Deon Cain had the first 100-yard receiving game of his career as the Tigers drubbed the Syracuse Orange 54-0 in Memorial Stadium to improve to 9-0 on the season, 6-0 in the ACC.

Clemson rolled up 565 yards of total offense - 195 on the ground and 370 through the air. Nick Schuessler was 11-of-17 for 177 yards and two touchdowns in a relief effort, while Mike Williams added six receptions for 105 yards and a score.

“When Deshaun (Watson) got banged up, we felt we had good control of the game and he was ready to come back in the second half, but (Nick) Schuessler did a great job stepping up today," head coach Dabo Swinney said. “He set a great example for his teammates. It’s a hard to continue to have to prepare each and every week like you’re the starter. It’s a hard thing to do, but that’s what it’s all about. I’m so proud of Nick for going in there and making some great throws. We kept on clicking and it was an outstanding win.

“Great job by our guys today. We spread the ball around to a lot of guys and Deon (Cain) had a career day. Our offensive line played great when we were down without (Jake) Fruhmorgen. (Sean) Pollard and (Tremayne) Anchrum stepped up and did a great job manning that right side today.”

The Tigers forced a quick three-and-out on Syracuse to begin the game, and the Tigers took 10 plays to drive just 36 yards, getting a 22-yard field goal from Greg Huegel for a 3-0 lead just over five minutes into the game.

The teams traded punts, followed by the first turnover of the game. Syracuse took over at its own 26, but Eric Dungey’s pass was intercepted by Ryan Carter at the 32 and Carter returned it to the Orange 15-yard line. Three plays later, Watson scored the 19th rushing touchdown of his career and his 90th touchdown responsibility with a 1-yard run and Clemson led 10-0 with 3:47 to play in the first quarter.

“Ryan Carter got us going with his interception in the first quarter," Swinney said. "The interception return by Tanner Muse was a thing of beauty. To get a shutout like this against a team that is capable of scoring and knows what they're doing offensively is amazing. Give a ton of credit to our coaches and players for their performances today. We want to set the tempo, and I think we did just that.”

On the ensuing possession, Dungey and starting wide receiver Brisley Estime were both knocked from the game, and the Orange were forced to punt. Clemson took over at its own five, and Wayne Gallman got the Tigers out of trouble with a 30-yard gain. On the next play, Watson hit Deon Cain down the left sideline for a 65-yard touchdown, the longest play of the season for Clemson, and the Tigers led 16-0 early in the second quarter.

The Tigers forced another Orange punt and took over deep inside their own territory. Again, it didn’t matter as Tavien Feaster helped lead a 12-play, 89-yard drive that ended with a 14-yard scoring toss from Watson to Mike Williams. Feaster carried the ball three times for 25 yards on the drive, and Clemson led 23-0 midway through the third quarter.

Syracuse returned the ensuing kickoff 68 yards to the Clemson 35, but the drive’s second play ended with an interception by Cordrea Tankersley at the Clemson 14.

It took the Tigers 14 plays to cover the 86 yards for the next score. Watson converted a big third down towards the end of the drive and had to leave the game, with the trainers looking at his right shoulder. Backup Nick Schuessler converted on third down – a rope to Jordan Leggett – and finished the drive with a five-yard scoring pass to Artavis Scott for the 30-0 lead late in the half.

Syracuse attempted an onside kick coming out of the half, but instead of giving the Orange an early momentum boost it gave Clemson a short field to work with, starting at the Orange 44. Five plays later, Gallman punched it in from five yards out and the Tigers led 37-0 barely three minutes into the third quarter.

A 49-yard run set up the best scoring chance for Syracuse on the ensuing drive, but kicker Cole Murphy missed a chip shot field from the right hash. That set up another Clemson scoring, with Schuessler leading the Tigers on a 10-play, 80-yard that culminated in an 18-yard scoring pass to Cain, Cain’s eighth of the season and 13th of his career as Clemson led 44-0 late in the third quarter.

Syracuse once again put together a drive, reaching the Clemson 42, but Wilson's pass to Etta-Tawo was deflected and reserve safety Tanner Muse grabbed the ricochet and rumbled 64 yards for a touchdown to make it 54-0. It was the longest interception return for a touchdown for the Tigers since Jonathan Meeks went 74 yards against Virginia Tech in 2012.

Muse also became the first freshman to return an interception for a touchdown since Wayne Simmons did it in 1989.

Clemson returns to action next Saturday, hosting Pitt in a 3:30 p.m. kickoff in Death Valley. Pitt fell to 5-4 with a 51-28 loss at Miami Saturday.

Clemson vs. Syracuse Box Score
Comment on this story