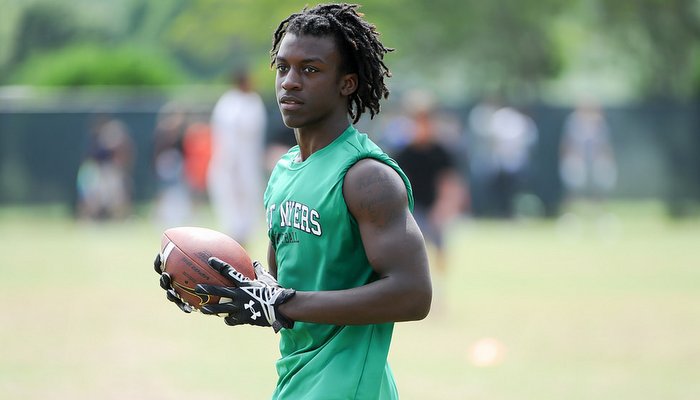 Darrian Felix continued to impress at running back during Tuesday's session

CLEMSON – The offers are beginning to flow out at Dabo Swinney

Brent Venables
Def. Coordinator / Linebackers
View Full Profile was stopped by head coach Dabo Swinney early in Tuesday’s session. Venables broke out in a smile after his conversation with Swinney, exchanged a few pleasantries with his dad and later announced that Clemson had offered.

Derrik Allen
Cornerback
6-1, 180
Marietta, GA
View Full Profile tweeted before camp that he had gained a Clemson offer as well, and another offer went out to Cartersville (GA) 2018 quarterback Trevor Lawrence.

We also told you about Florence (SC) Wilson 2018 defensive end Xavier Thomas, who was an absolute standout during the morning session, and he picked up an offer as well. Thomas spent several minutes with Brent Venables and Marion Hobby

*A new camper for the afternoon session was Rock Hill (SC) Northwestern 2017 tight end Logan Rudolph, whose brother is Oklahoma St. quarterback Mason Rudolph. Rudolph was in attendance with his father, who played at North Carolina and wound up spending several minutes with tight ends coach Danny Pearman

*From everything we’ve heard, Gibsonton (FL) East Bay defensive back K.J. Sails was among the top performers during the morning sessions. We talked about Sail after the morning session – he arrived on campus with a group from Tampa that included the brother and father of Clemson signee Ray-Ray McCloud.

*Another local prospect spent time with Clemson’s coaches this afternoon as Greer defensive back Troy Pride was on campus. The Virginia Tech commit doesn’t have a Clemson offer.

*Chrishawn Wilson hails from Florence (SC) West Florence, the same school that produced Clemson’s Malliciah Goodman. The 2017 defensive end prospect was another standout during the early part of the morning drill session for me, and his long frame and muscular build means he can add weight without losing any burst. He’s another one to keep an eye on.

*Lexington (SC) 2017 wide receiver Jayson Hopper impressed during the workouts on Monday and Tuesday, and he drew an interested observer in the form of Dabo Swinney during one session Tuesday. Hopper was joined by Rock Hill (SC) South Pointe athlete Derion Kendrick and DaQuon Green in an impressive group of receivers Tuesday.

*Another name to keep an eye on is Fort Myers (FL) running back Darrian Felix. The 2017 prospect looked to be far and away the best back on campus Tuesday.

*One of the “coaches” working the camp is former Clemson safety Rashard Hall, who looks like he is having a blast working with the safeties. Hall is helping with the football team while he pursues his M.B.A.

*If I had to pick the most vocal coach I’ve seen so far, it would be former Clemson linebacker LeRoy Hill Hill doesn’t mind getting dirty – just like in his playing days – and looks like he would be one heck of a coach for somebody.