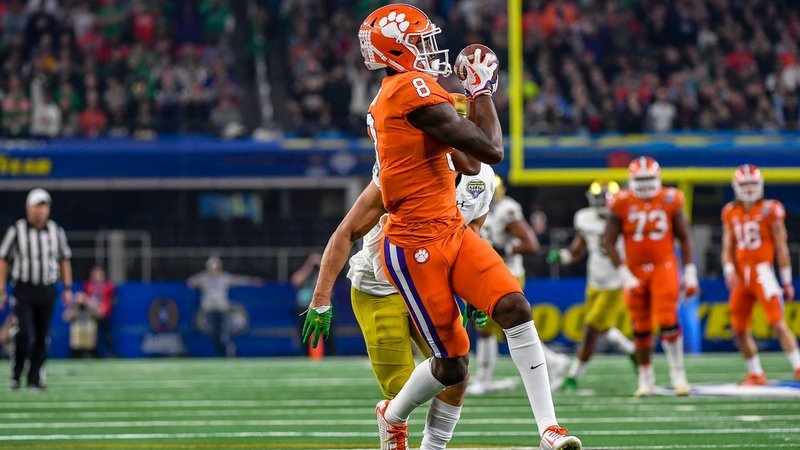 Justyn Ross makes a big catch against the Irish

Notre Dame head coach Brian Kelly credited Clemson with making the plays it needed to in order to win Saturday’s Cotton Bowl, saying that the Tigers took advantage of the loss of Julian Love to pick on the Irish secondary.

Trevor Lawrence passed for 327 yards and Justyn Ross has six catches for 148 yards (an average of 24.7 yards per reception) as the Tigers routed the Irish 30-3. Love, Notre Dame’s star corner, went out early with a head injury and the Tigers made short work of the Irish secondary in rolling to the win.

“Disappointed, obviously. We came here to win a football game, and we did not do the things necessary to beat a very good team,” Kelly said. “Congratulations to Clemson. They played well. They were opportunistic. They made the plays necessary to win in a game of this fashion. Opportunistic in that we lost one of our very fine defensive backs in Julian Love to a head injury. But, again, you can't give up four big plays on defense. We did not do that all year. Uncharacteristic of our defense. And we generated virtually no big plays. We didn't play the kind of offense that would lend itself to scoring enough points to beat a talented Clemson team. So we've got to coach better.

The Irish have played on the biggest stage twice since 2012 and have lost both games by a combined score of 72-17. Notre Dame lost 42-14 to Alabama in the 2013 BCS Championship Game, and Kelly was asked if this game felt different.

“I want to be clear I understand the question. Do I feel like it's different than that game? Oh, I do. Absolutely. I left that game feeling like there was so much work to be done from the inside out, so much development, so much recruiting,” he said. “This felt so much different, like we gave up four big plays that we characteristically don't give up. And very capable of moving the football and doing the things necessary to beat this football team. They were the better team today. There's no doubt about it.

“But with now giving them the opportunity to see how they need to play in this atmosphere, not flawless but with excellence, we can come back here and win. So it's a real different feeling for me. I almost have to go like -- I mean, they should play the (Chicago) Bears after playing that game against Alabama. This is a totally different feeling. I feel like this football team is on the brink. Where, when I left that game, it was, "Boy, do we have a lot of work to do."

Kelly said the Tigers were opportunistic across the board.

“Well, we gave up four big plays. I think Clemson was extremely smart and opportunistic in taking advantage of some things schematically today,” Kelly said. “They did a great job of pushing the ball vertically in some opportunistic situations. And offensively we struggled moving the football today. So those were technical and tactical. I did not feel like there was an overwhelming difference in terms of talent. They have extremely talented players. But, if we were better tactically and technically today, if we coached better and we made plays today that we have been making all year, we would have had a pretty darned good football game going in the fourth quarter. It didn't happen that way. So we're on the brink. We're close. We're going to work our tails off to get back here.”