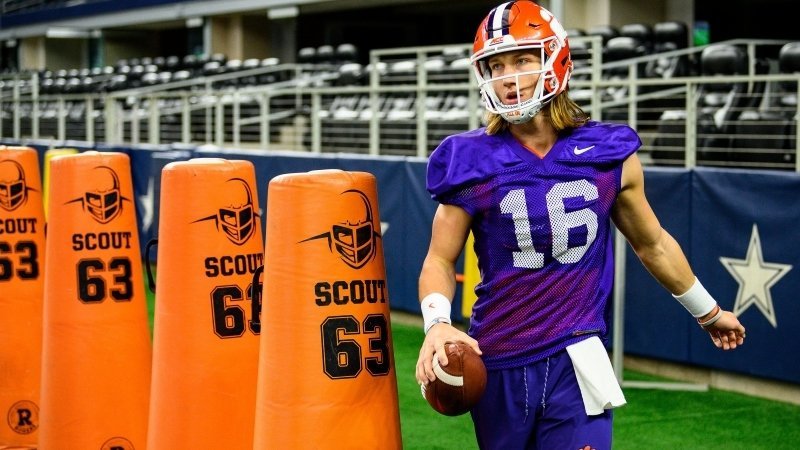 Lea met with the media Wednesday morning to discuss No. 3 Notre Dame’s matchup with No. 3 Clemson, and said while he didn’t see much of Lawrence’s college film before a few weeks ago, he does remember Lawrence’s high school career.

“In season, I consume enough football from Sunday to Saturday that I don't tend to watch just for fun. So, I had not seen much of him,” Lea told TigerNet. “I remembered him out of high school. Honestly, that hair stuck out, being a guy that's challenged that way (Lea is bald). But I hadn't watched him much.

“Obviously, in preparation for the game, I've been incredibly impressed with him, and I've been able to watch him for a month. And so, in doing that, you see the first thing that stands out to you is the talent, the arm talent, and the athleticism, too. But just the way he gets the ball out and how hard he throws it, it's incredible the length of field he covers and in an instant with the ball.”

Arm talent isn’t the only thing impressive about the Tigers’ freshman signal-caller.

“But then, when you study him further, what almost is more imposing is his decision-making. He must be a really, really sharp player for the coaches,” Lea said. “He can identify coverages. He gets the ball out. He makes decisions in the RPO game, off quick reads. When he has a matchup he likes, he puts the ball up and positions together. It's incredible. So I don't know that there will be a snap where we won't be concerned with their ability to go the length of the field on Saturday.”

Lea said he can see on film that Lawrence is a different quarterback than the one who took over for Kelly Bryant in game five.

“Absolutely. There's a comfort level you see, a confidence you see. He has evolved and grown and has been just so steady for a young player,” Lea said. “It's really impressive. I think he's really well-coached. They, obviously, have a great program for development. Then for a young guy that knows when he makes a mistake, he may be missing a read and handing the ball off to Number 9 [Travis Etienne], that's not a bad snap for Clemson either. He's going to throw the ball out to a receiver who can go get it for him. It's a really well-run operation.”

Lea spent one season at Wake Forest (in 2016), and says Lawrence reminds him of a quarterback he saw that season.

“One thing I remember about Deshaun Watson is that you tried to pressure him and how quickly the ball came out of his hand,” Lea said. “The arm strength part of it, I would have to study it more to speak on that. But with those two just in terms of how quickly the ball comes out and the decision-making. When I put the film on, it took me back to 2016 when we were kind of watching film on Clemson when I was at Wake Forest. He's as good as any quarterback we've played. He's exceptional.”