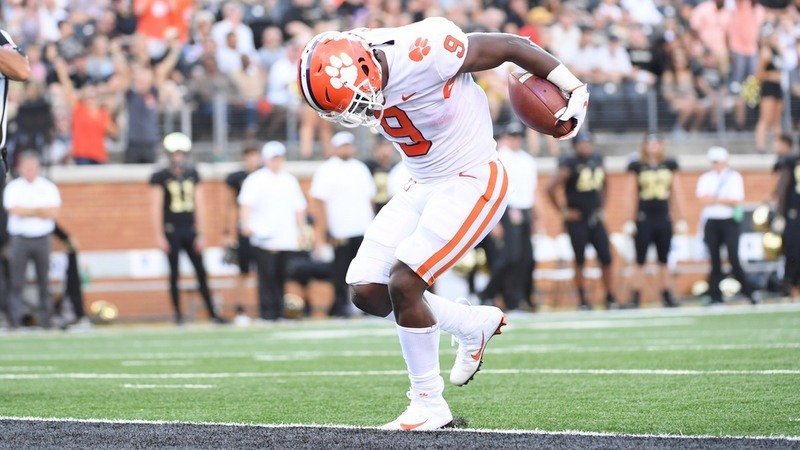 WINSTON-SALEM, NC – No. 4 Clemson needed to make a statement heading into the open date, and that statement was made loud and clear.

Things were so comfortable for the Tigers that Hunter Renfrow punted in the fourth quarter, then followed that with a series at quarterback, completing a pass to Will Swinney. Renfrow led a scoring drive, handing off to Dixon for a 52-yard scoring run with 48 seconds remaining.

"Well that was just a good old-fashion butt-whipping," Clawson said. "Clemson played great, we played poorly. As a program, we have to own it. 63-3, I'm the head coach of it, the assistant coaches are the assistant coaches of it, the players are the players of it. We just have to own it. We've got problems right now and we need to get to the bye week and reset the season. We need to get some things fixed and get healthy. We just have to figure some things out. I didn't see this coming but they played really well and we didn't."

Clemson's Dabo Swinney said it was a win the Tigers needed, especially after the events of the last two weeks.

"Yeah, I don't think there is any question [that we needed this]. I wanted to see this team," Swinney said. "I thought last week, as I said, was one of the best wins I've ever been a part of. I know a lot of people will look at it and say Clemson beat Syracuse in game five of season 2018, but I'm telling you that's one of the best wins I'll ever be a part of. It was amazing because the score didn't tell the story. What I saw in our team, seeing our team stick together and have each others back, being built to win, it's just special. I really felt like we were going to play our best game this week. I didn't know it'd be 63-3, but I thought we were ready to go out and play a complete game and complement each other well. We did that.

"We had a great week of practice, a great week, and these guys were bought in, they were dialed in. Great meeting last night, I just had a good feel for our team and I just felt like this would be one of those games that we can really make a statement with. I thought the team did that and it's what we needed in momentum and confidence going into this open date. Last year we lost a game and came back and won the rest of them. This year we have won so you go away and you still have to come back and play football but I certainly think this is a team win."

The Clemson offense scuffled for much of the first quarter, punting on two possessions and fumbling on another. Etienne made the Deacons pay on the fourth drive, taking the handoff and blasting up the middle for a 59-yard touchdown run that gave the Tigers a 7-0 lead.

Two series later, a Tanner Muse interception set up a three-yard run by Etienne, giving Clemson a 14-0 lead early in the second quarter. The touchdown marked the fourth consecutive game with at least two touchdowns for Etienne.

The Tigers hit a big play in the passing game to cap off their third scoring drive. The drive covered 75 yards in just five plays, the last play seeing Lawrence hit Justyn Ross down the seam. Ross gathered in the ball around the Wake Forest 30, saw a defender, and hit another gear on his way to a 55-yard touchdown and Clemson led 21-0 with 9:53 to play in the second quarter.

With that touchdown, Lawrence becomes just the fourth freshman in program history to throw for double-digit touchdowns in a season.

The Tigers added a score late in the half. Wake Forest went for it on fourth down deep in Clemson territory, but the 4th-and-1 attempt was snuffed out by the Clemson defense at the 19 and the Tigers took over. Ten plays later Lawrence hit Tee Higgins over the middle for a 20-yard score, and the Tigers led 28-0 at intermission.

The defense forced a 3-and-out to start the second half, and a long punt was fielded at the Clemson 30-yard line by Amari Rodgers with a fair catch. The first play from scrimmage belonged to Etienne and he burst up the middle, almost untouched, for a 70-yard run and a 35-0 lead just over a minute into the second half.

The Deacons finally got on the board with a third quarter field goal that made it 35-3.

Adam Choice got in on the fun on ensuing possession, rushing for 14 yards on the first two plays of the drive and then taking the third play 69 yards up the middle for a touchdown. The drive covered 58 seconds and just three plays and the Tigers led 42-3 with 4:41 still to play in the third.

The very next play for the Tigers continued the onslaught. A Wake Forest punt gave Clemson the ball at the 35 and Lyn-J Dixon took the first play 65 yards up the right sideline for a touchdown, giving Clemson a 49-3 lead late in the third quarter. The last time a team had four or more runs of 50-plus yards in a game was in November of 2016 (New Mex vs Wyoming). No ACC team has done it since at least 2004.

The Tigers continued to pour it on, with Chase Brice hitting Diondre Overton on a two-yard fade route early in the fourth quarter, and the Tigers led 56-3 with over 10 minutes left to play in the game.

The Tigers are off this week and will host NC State on Oct. 20th. The gametime has not been announced.

Clemson vs Wake Forest Boxscore
Comment on this story