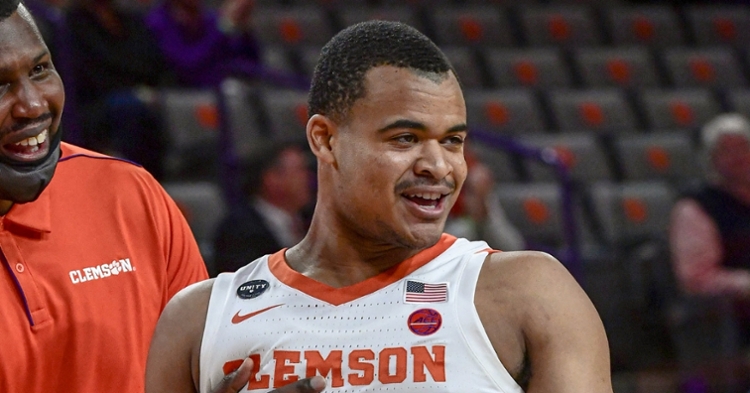 Honor is second on the team in scoring. (Photo courtesy ACC)

Clemson basketball coach Brad Brownell followed Nick Honor’s high school career and was intrigued but didn’t recruit the 5-10 guard out of Orlando because of his size. Brownell admitted this week that the one thing that couldn’t be measured, Honor’s heart, is what makes him a perfect fit at Clemson.

Honor played a huge part in Clemson’s comeback win over Miami a week ago, and then scored a game-high 21 in the comeback victory over NC State Tuesday night as the No. 19 Tigers improved to 3-1 in the ACC. Honor sat out last season after transferring in from Fordham, where he played his freshman season. During his time at Fordham, Honor Started all 32 games and led the team with 15.3 points per game (489 total points) in 36.1 minutes per contest (1,155 minutes).

However, he always had the confidence he could play at a higher level and now is making his dreams come true at Clemson.

“It gives me a good feeling and thanks to God for making everything happen,” Honor told TigerNet this week. “As a young kid, I wanted to play at the highest level. The path to Clemson wasn't always clear out of high school, but God always makes a way. I am glad to be here and just thankful to be in this position.

“Out of high school, I was kind of in-between on recruiting. I had some mid-major offers and I had a few that were of high major interest. Coming out of high school I wanted to go somewhere where I could contribute right away and have that experience under my belt. So I committed and went to Fordham. Unfortunately, I had a family emergency towards the end of my freshman year, so I sat and prayed about it and realized that it would be a lot easier to be closer to home in Orlando, Florida. So that is how I was led to this destination.”

“He is a confident guy. He is a little bit of an overachiever just based on his size. We didn't recruit him coming out of high school,” Brownell said. “We weren't sure because of his size if he was going to be good enough. I liked his game but I didn't know if that would translate. And the hardest thing about recruiting is measuring a kid's heart. Measuring their heart and even their smarts and their confidence. You don't know sometimes. And that is a credit to Nick and his family and how he was raised. He is a big-time player and he is going to make big-time plays if he gets a chance.”

Honor isn’t the most vocal player, so Brownell had him call two of his teammates each day over the summer in an effort to help him become a leader.

“It definitely helped. I am usually a laid-back guy and keep to myself, especially when I am back home,” Honor said. “It really wasn't as important when I was sitting out last year, but when I was coming up on playing, Coach said that being a point guard I had to be more vocal so he challenged me to do the FaceTiming. I definitely became closer to my teammates in figuring out what they were doing during quarantine and what they were doing to get better. Each day I am trying to get better and becoming a better leader for this team.”