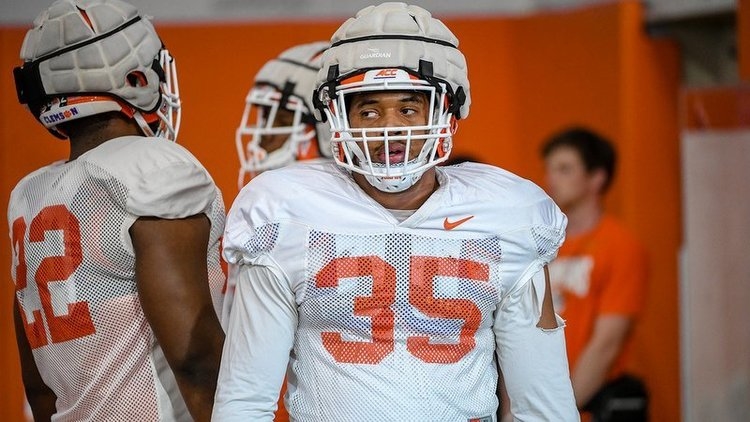 CLEMSON – Justin Foster is in line to make his first career start in eight days when No. 1 Clemson hosts Georgia Tech, and it’s a start Foster has dreamed about since committing to Clemson almost three years ago. What he didn’t dream was that he would make the start as a defensive end.

The junior out of Shelby (NC) Crest contributed in a reserve role in 2017 and 2018 and enters 2019 credited with 25 tackles (7.0 for loss), 2.5 sacks and a fumble recovery in 264 snaps over 24 career games. He made the transition from linebacker to end after making his way to Clemson, and he told the media Tuesday that he should have known that defensive coordinator Brent Venables had the move in mind.

“V (Venables) kind of kept comparing me to Vic Beasley, and he stood up all the time and came off the edge, so it was kind of like a little set-up. I like it,” Foster said. “I never did think I would be a defensive end. I thought I would be like an outside linebacker, but I like it now.”

What has been the biggest adjustment he’s had to make?

“I would say just actually putting my hand in the ground. That was difficult because, as a linebacker, I could see everything around,” he said. “I saw the whole field, and the fact of having one key and keying on offensive linemen or the tackle every play, and not being able to see everything. I guess that was the hardest thing, but it's just tough, going from standing up the whole game to that.”

However, Venables isn’t shy about dropping his ends into coverage and Foster thinks his linebacker past gives him an advantage over other ends.

“In high school, I dropped, came off the edge and everything,” he said. “I just never put my hand in the ground, and when it came to drops and stuff, I feel natural dropping into coverage and playing in space.”

He is even looking for a coveted interception.

“We talk every day in practice, like when one of us gets an interception or something, coach always tells us it's practice,” Foster said. “You have to get one in the game, so it's competing every day. And if one gets close, you're going to try and get it.”

The Tigers lost several key linemen from last year’s championship team, and Foster says no one on the defensive line wants to lower the standard set by players like Christian Wilkins and Clelin Ferrell.

“Clelin set the standard, and it's tough. Everybody's fighting, there are good guys behind me, and you just got to fight every day,” Foster said. “I'd say it's a motivation. Those guys set the bar really high. You want to make sure you don't disappoint them, and we just want to work hard. You don't want to be like them, we want to be ourselves, but we just want to keep competing and keep the standard the same.”

Foster said he knows he isn’t a finished product and still has plenty of areas in which he can improve.