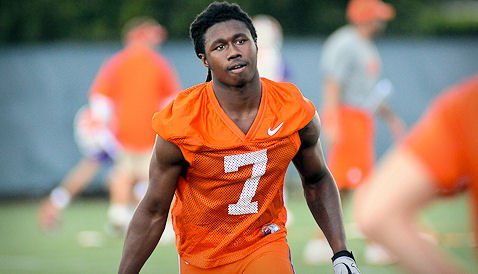 Swinney said he's never had a freshman like Sammy Watkins.

CLEMSON – True freshman wide receiver Sammy Watkins hasn’t even played a game for the Clemson Tigers, but the Florida native has already made quite an impression on his new head coach.

Swinney told the media following Thursday’s practice that Clemson fans will see a lot of Watkins this fall.

"You can't compare other freshmen to him. I've never had a freshman like him,” Swinney said. “I've been around a lot of talented freshmen here and at Alabama, but none quite like him as far as the total package from the day he walked on this campus. I'm talking about ball skills, work ethic, attention to detail, size, toughness, the way he studies the game.

“He just has the whole package. And he makes very few mistakes. He has great football instincts. It's really been something to see. You pick his notebook up and he's got 10 pages of notes from one meeting. Then he studies it. He's a very, very focused player. And that's uncommon. He's definitely going to be a big factor for us this year. He's a rare dude."

*Swinney said that three of his freshmen linebackers could escape the redshirt this season.

"Right now for sure, Tony [Steward] and Stephone [Anthony]," Swinney said. "No doubt about those two. Lateek [Townsend] and Colton [Walls] we are going try to hold. We are very pleased with both those guys, but it's a situation where we got some other very good players. You just can't play everybody. You can't get everybody ready. B.J. [Goodson] is probably on the bubble right now."

Adam Humphries
Fr. Wide Receiver
#13 5-11, 175
Spartanburg, SC
View Full Profile has made a case for playing time this fall despite a crowded rotation at wide receiver.

"He's going to play for us," Swinney said of the Dorman product. "He's a guy we really wanted to red-shirt. He's just made it where we can't. He's just that good. The guy is a ball player. He's as good as anyone we signed in this class. We really wanted to hold him, but it's unanimous. Everybody [coaches] feels like this guy is going to help us in the conference this year so we are going to get him ready to play."

* Swinney said Charone Peake and Martavis Bryant will get playing time this year as well.

"Charone is not far behind him [Watkins]," said Swinney. "He's done a great job. This guy is incredibly talented. Martavis is going to play. His talent is off the chart, but he looks like a true freshman. He looks like a guy we got to do a lot of coaching."

"Joe was back with us today," Swinney said. "It was good to have him back. He will miss the first three games. Then we will get him back after that."

*Swinney said that he likes the makeup of his team.

“I really like this football team,” he said. “I know we are a mixed bag, but we have a chance to be a really good football team if we get better each week and learn from our mistakes. If we can do that, hopefully we will win them all. That is our goal. When all is said and done I think we are going to be a great football team with a great future. We have a lot of talented guys, that once they gain experience they will be hard to deal with.”

*Troy is on the horizon.

Swinney said that Thursday’s practice was devoted to Troy, the team that Clemson plays a week from Saturday, and that the coaches put Wednesday’s off day for the players to good use.

"We had a great day of planning yesterday,” he said. “Obviously we've already done a lot of preliminary work on them. We went back over thoughts we had from our initial evaluations and then we had a good practice today. Tomorrow will be a mock game against Troy. It will be game situations, substitutions."

Swinney said the coaches will even get the freshmen acclimated to what happens on game day.

"We have a bunch of guys who don't know anything about game day,” he said. “I even had one player ask one of our veterans, 'What time do you show up at the game on Saturdays?' That's what we're dealing with. We have a lot of things to teach them.

"I'm talking about locker room, gathering at the paw at the end of the game to sing the alma mater, how we come down the hill, where you go at halftime, sideline organization, all those types of things. We've got half our team that's inexperienced on game day. Tomorrow will be a big day for that. We'll really test them in a lot of areas tomorrow."