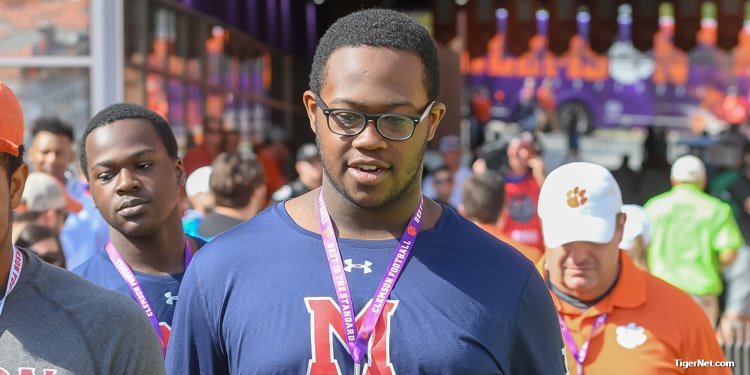 Tchio is the third OL commitment for the 2020 recruiting cycle

Clemson’s 2020 recruiting class continues to pick up steam, and it’s the third commitment for the offensive line.

He narrowed his decision to Clemson, Alabama, and Georgia and was at Clemson Saturday night, his third visit of the season.

"The family atmosphere. It was so real and genuine there that me and my family could definitely notice that and it was something we really wanted to be a part of," Tchio said. "They are definitely dominating the ball. All three of the running backs are producing, the O-Line is moving the ball really well and they are doing a really good job. It's something I can't wait to be a part of."

Tchio is the third offensive lineman to commit for the Tigers' 2020 class, joining John Williams of Canton, GA and Walker Parks of Lexington, KY.

An offensive guard, he's ranked 8th nationally at his position by Rivals and 24th overall in the state of Georgia, but can also play on the defensive side of the ball.

"They like me so much because I'm versatile. I can play offense and defensive line," he said. "I've been playing a lot of defense this year. And the fact that I can play guard and tackle, and maybe I'll play center when I get there, too. With the way my body fills in, they could put me at a lot of different places."

"He's a real cool dude. He's like old-style but he's always fun to be around. He knows when to be serious and he knows how to get the job done. I think that's the most important thing, getting that job done,” Tchio said.

He his high school teammate, safety Joseph Charleston, is a Clemson commitment for the 2019 class.