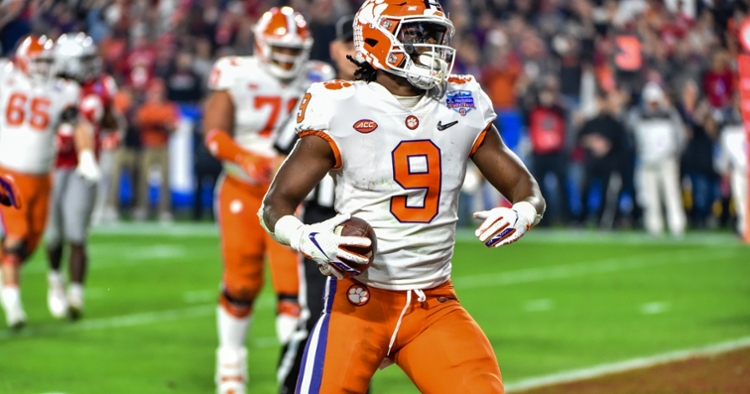 Etienne has a chance to break several records this season.

The NFL Draft is complete, and Travis Etienne might be one of the biggest winners.

The NFL held the draft over the weekend, an unusual show with all of the prospects sitting in their homes watching with the rest of the world while NFL commissioner Roger Goodell butchered names, failed to know when he was back from commercial backs, and implored the fans on the screens behind him to at least act like they were having a good time.

Sports pundits across the country will come out and tell us who they think are the winners and losers, but there is no doubt in my mind that Etienne was one of the weekend’s biggest winners (depending on what happens with the virus and the 2020 football season).

Offensive coordinator and running backs coach Tony Elliott stood in the locker room following the loss to LSU and said he thought Etienne should head to the NFL, that he had nothing more to prove in college. Most people thought that Etienne would turn pro, but I received a text the next day that said, simply, “We think he’s coming back.”

I didn’t need to be told who “he” was. Etienne did decide to return for his senior season, and the haters came out in force, blaming everyone from head coach Dabo Swinney to religion to the ACC.

The move turned out to be a good one. LSU’s Clyde Edwards-Helaire was the one and only running back taken in the first round of the 2020 NFL draft, and he was taken with the 32nd and last pick of the first round. Georgia’s D’Andre Swift was taken the next day and it started a run on backs, but those players will receive a lot less money than say, Isaiah Simmons, who was taken with the No. 8 overall pick.

Several draft experts said that Etienne was the fifth-best back if he had decided to come out, and the fifth running back wasn’t taken until the second pick of the third round (No. 66 overall). Now, I have no doubt that Etienne is better than anyone they had in front of him, but the NFL is funny. They would have poked holes in everything about his game, from protection to catching the ball, until they would have talked themselves out of a great player. And someone would have come out and pointed out that Etienne averages just 13 carries per game and wondered if he was durable enough for the pro game.

Etienne can run wild next season, shatter college football records, and lead Clemson to another National Championship and make a lot more money in the 2021 draft.

*LSU had an incredible 14 players drafted, and that tied the all-time record, set by Ohio State in 2004, for the most players picked from one school in a single NFL draft since it was shortened to seven rounds in 1994. Clemson had seven players drafted, meaning we saw at least 21 drafted players in the title game. That number will, of course, go up next year.

Early mock drafts have as many as five Tigers taken in the first round alone next season. I made a post about that Saturday night, and Clemson’s legendary Tim Bourret chimed in to tell me that an astounding 46 players who played in the 2016 championship game between Alabama and Clemson have taken a snap in an NFL game. That’s right – there were 46 players on the field that night in Tampa who have played in the NFL. Thirty of those are from Alabama, which lends credence to just how good that team was.

It remains to be seen if the game between Clemson and LSU will match those numbers.

(Just as an aside, LSU has been gutted. From losing offensive wunderkind Joe Brady to so many starters, that team will have a hard time getting past Bama this season. They remind me of those NCAA basketball teams that manage keep guys around for three and four years and then make a deep run in the NCAA Tournament. It all came together for one magical season.)

*Another nugget on some of these championship teams and the draft. Out of the starting 11 on Clemson’s defense in 2018 – the latest championship team for Clemson – five wound up being first-round picks (Clelin Ferrell, Dexter Lawrence, and Christian Wilkins in 2019 and AJ Terrell and Isaiah Simmons in 2020). Trayvon Mullen went in the second round in 2019, Tanner Muse went in the third round this year, and Austin Bryant (2019) and K’Von Wallace (2020) were fourth-round picks. That’s right, nine of the 11 starters were drafted and will likely be on an NFL roster this season.

*It will be interesting to see what happens with K’Von Wallace in Philly. This is a guy that seems to thrive when he plays with a chip on his shoulder, and he will have a big one this season. He even made it clear on the conference call with the media that he was coming after someone’s job.

*I am a lifelong Denver Broncos fan, but the Las Vegas Raiders are making it hard on me by having so many ex-Clemson players on the roster. I jokingly told Hunter Renfrow that I want to come to a Broncos-Raiders matchup and I would wear a Raiders jersey if he got me tickets (again, I was joking, no way am I wearing a jersey to a game, much less a Raiders jersey). But there is no doubt that many Clemson fans who don’t have a main team they root for in the NFL are switching from the Texans to the Raiders.

*Speaking of the Texans – it just seems that head coach/general manager Bill O’Brien is in over his head, doesn’t it? He hasn’t had the best offseason, and the draft was just an extension of that. As someone who really likes Deshaun Watson and wants what is best for the guy, maybe some NFL team needs to call up old Bill and offer a couch and a trailer for Watson and see if he bites. Heck, I would rather Watson play in the evil empire of New England.

*The seven Clemson selections in the 2020 NFL Draft pushed Clemson’s number of draft picks over the last five years to 31, adding to what is now the most-prolific five-year stretch of drafts in school history. Six of Clemson’s seven 2020 picks were selected in the first four rounds, breaking the program’s previous four-round record of five, set previously five times in 1991, 2011, 2016, 2017 and 2019.