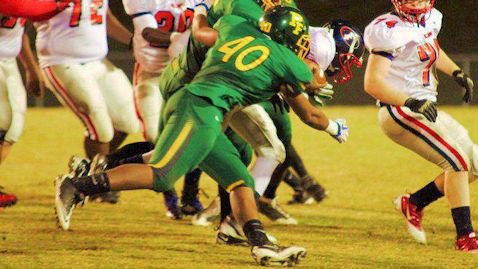 Harold Landry
Defensive End
6-2, 225
Fayetteville, NC
View Full Profile has caught the attention of many of the Southeast’s top programs, including the Clemson Tigers.

The 6-2, 225-pound hybrid defensive end/outside linebacker prospect out of Fayetteville (NC) Pine Forest made his way to Clemson two weeks ago, where Landry received some good news from defensive coordinator Brent Venables

Landry told TigerNet that Venables had a message for him- keep working hard and an offer will come.

“I got to sit down and talk to Coach Venables for a few minutes,” Landry told TigerNet Friday evening. “He said that he liked what he saw on film and the way I play. He told me that if I keep practicing hard and come to camp and perform then I will get an offer.”

Landry said that his trip to Clemson was one of the best recruiting trips he has taken thus far in the process.

“It was by far one of the best trips I’ve been on,” Landry said. “It was right up there with South Carolina. I had fun and it was a great visit. I came down last weekend and we got to watch practice. It was Youth Day so the players were signing autographs and talking to the kids. We just got to tour the facilities. Coach Swinney talked to us a group.”

After his visit to Tigertown, Landry said he doesn’t really have a favorite, but a group of four schools that he really likes.

“Right now, I don’t really have a favorite,” he said. “I like Boston College because they just offered me. I’d say that my top four are South Carolina, Clemson, Boston College and UNC, but not in any order.”

Landry said he wants to weigh all of his options before making a decision, but hopes to end the process before signing day.

“I’m not sure when I’ll commit. I’d just like to wait and see to allow me to get some more offers to weigh all of the possibilities before I make my decision,” he said. “I’ll probably make my decision before signing day, but I’m not sure.”

As a junior, Landry had 95 tackles, eight sacks, one forced fumble, and two fumble recoveries.