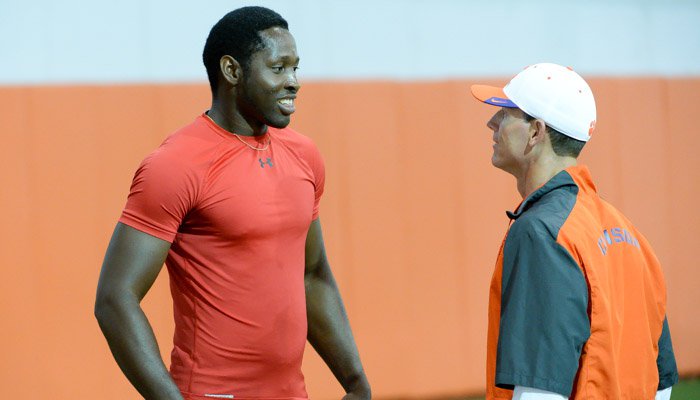 CLEMSON – Three down and three to go.

The third day of Dabo Swinney

Dabo Swinney
Head Coach
View Full Profile ’s high school camp wrapped up Wednesday morning, but it wasn’t without its share of activity. Prior to the start of the session – as the players were warming up inside the indoor practice facility – a new camper at the back of the line turned a lot of heads.

He was greeted by several of Clemson’s coaches, then approached by defensive coordinator Brent Venables

That work had just begun when Swinney dropped by for a handshake and a few words. So who was the mysterious stranger? His name is Wale Ogundeyi, a 2016 defensive end prospect out of Asheville (NC) Christian School. Ogundeyi (6-8, 245) – whose first name name is pronounced “Wally” – was on hand with one of the coaches from the Asheville area.

Ogundeyi hails from Nigeria and came to the United States two years ago, where he pursued his first love of basketball. But he began to gain weight, and Asheville coach Reid Bennett managed to talk Ogundeyi into coming out for football. After the first practice Ogundeyi was hooked and his team played against former Clemson running back Roderick McDowell’s Anderson Christian School in a scrimmage.

McDowell liked what he saw and told the Clemson coaches about Ogundeyi, and the invite to Clemson’s camp took place.

Ogundeyi is raw – as you would expect – and two coaches spent time working with him on the stance and how to get off the ball. He also spent time with Hobby just learning how to hold the practice bags Hobby was using when teaching defensive end moves.

Considering that he is a 2016 prospect, I’m not sure if Clemson would send out an offer or perhaps offer a grayshirt or maybe offer as a preferred walk-on. But the kid has the body type to be successful, and he looked extremely athletic during the drills I watched.

View Full Profile , the 4-star offensive lineman from Charleston (SC) Fort Dorchester was back again Wednesday and worked out with the linemen. That has to be good news for Clemson’s coaches, who have had three full days to work with Simpson. More on his visit later.

*Another offensive lineman that was on hand was Atlanta (GA) Pace Academy 2017 prospect Andrew Thomas. Thomas already holds offers from South Carolina, Michigan and Miami among others and didn’t disappoint during the session.

We told you about 2017 tight end prospect Will Register

Will Register
Tight End
6-4, 245
Chapin, SC
View Full Profile out of Chapin (SC) yesterday, and on Wednesday he picked up an offer from the Clemson coaches. Build-wise, he reminds me of Sam Cooper, but not the Sam Cooper from high school but after he had spent a few years on campus.

Register was impressive during the first session and impressed with his footwork despite his size.