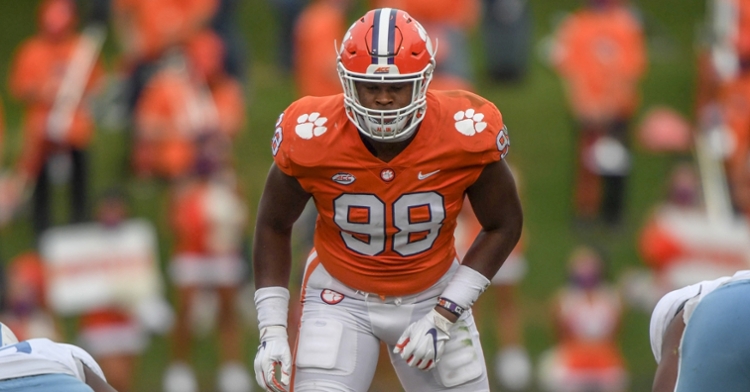 Murphy is third on the team in tackles. (Photo courtesy ACC)

True freshman defensive Myles Murphy was one of the standouts in Clemson’s loss at Notre Dame two weeks ago, an experience he thinks will help him the rest of the season.

Murphy played 60 snaps against the Irish and ended up with five tackles and a tackle for loss against one of the nation’s best offensive lines. It’s an experience and an effort he knows he can use to get better.

“It was a good experience, an eye-opening experience for me being a freshman and knowing that what caliber of the offensive line is and how I stack up against them and see how I performed against them,” Murphy said. “I think it was a great experience for me, honestly. I can grow on that and learn from it and keep going from there.

“The effort was there for me on that game. The issue with me was more mental than physical, use of my hands, and in pregame the watching and study of film. Learning their sets and some pre-set reads and things like that. That was the biggest thing. Staying on top of the plays and knowing my play and what I do and why I do it.”

Murphy was asked what his reaction would have been if he had been told before the season that he would log 60 snaps in South Bend.

He was then asked if 60 plays are too much or just the right number to give maximum effort for an entire game.

“When adrenaline is running you feel like you can play forever,” Murphy said. “Sixty is a lot but I was playing with good energy for the whole game.”

Murphy has played 282 snaps this season and is third on the team with 36 tackles. That includes nine tackles for loss and 3.5 sacks, and he leads the team with two forced fumbles. However, he said it took a while to get used to the speed of the college game and the playbook of defensive coordinator Brent Venables.

“It took me about a month to get used to that and get used to their speed,” he said. “Since then, I've slowed everything down to where I was in high school and now it's knowing my key and my responsibility and keeping it as simple as possible.

“It's been more mental than physical, by far. Coach V has a huge playbook with so many blitzes and coverages and whatnot. Probably up until two weeks ago I felt comfortable with the playbook. Before that, I had this and life away from football and school and a life off the field and away from school. It was a lot mentally, but now I am catching up on things.”

Murphy and the Clemson defense face another athletic quarterback this week in FSU’s Jordan Travis, who leads the Seminoles in rushing with 469 yards on 85 attempts, an average of 5.52 yards per carry.