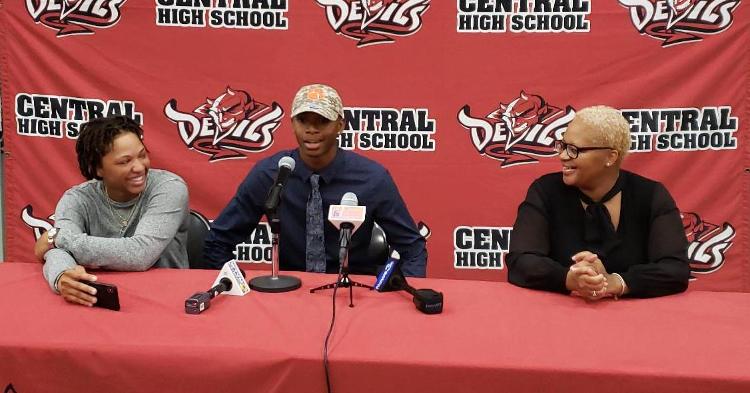 Williams is joined by his mother (right) and his sister Saturday

PHENIX CITY, AL – Never underestimate the power of Dabo Swinney and a trip to Clemson.

Swinney and the Clemson coaching staff picked up a commitment from 4-star 2020 wide receiver E.J. Williams of Phenix City (AL) Central Saturday afternoon when Williams chose the Tigers over LSU, Auburn, and Alabama.

Williams’ commitment ceremony featured a picture of his later father and he was flanked by his mother Vontrelle and sister Kahlia. Once Williams donned his Clemson hat, all three appeared to exhale and breathe a sigh a relief.

“It was stressful at times. Exciting. A lot of tears,” Vontrelle told TigerNet. “But at the end of the day, I am so happy that he's made his decision and it's behind us and now he can concentrate on his season and of course finishing up high school.”

Vontrelle said she knew Clemson was different during his first visit to the school.

“I remember my first time going to Clemson. You know how you see people on TV or you see other people talk about the experience and the person,” she said. “It was much more than I even expected when I got there. Just the people. And everyone had their family around all the time. There was never a time when we didn't see someone's child or they weren't talking about their children.”

“Dabo is amazing. For real. You see him and people say he is this way or that way,” Vontrelle said. “But when you actually see it, then you can actually just look at this man who believes everything he is saying to these young prospects and his players. It's amazing. Amazing how the players love each other and by competing they are trying to get each other better. It's an amazing place.”

Vontrelle said she was pleased with Kahlia, who played basketball at Mercer and has played professionally, was a part of the process.

“They are very close. My kids are very close. As a mother, I have always stressed that because I know I won't always be here,” she said. “They grew up super close. For his sister to be here to guide him has been an amazing experience. As a parent, you couldn't ask for anything more.”

Williams is following in the footsteps of Central products Justyn Ross and Ray Thornton, who both play for Clemson, and Vontrelle said she’s comfortable knowing that her son is in good hands.

“For E.J., we know it was a big decision because we heard from so many different coaches and so many different people that he was just going up there to follow them,” she said. “And I think that is what he was trying to explain to everyone. He is not trying to go up there and follow him (Justyn). He is trying to be my own man. Justyn is an amazing person and athlete, as Ray is also. They are all like brothers. I appreciate that he does have that family there. So when I leave him, I am not going to worry about anything.”