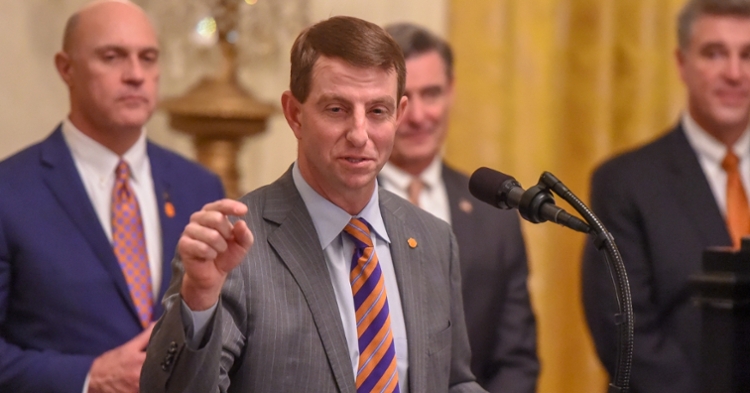 Swinney says this is a historic time in our nation

Clemson head coach Dabo Swinney used a video Monday evening to respond to those who have attacked his character and his program over the last week.

We ran the first of Swinney’s statement yesterday, and here is the rest:

On the Sikes Hall sit-in

"We had players participate in it. I would never tell someone they could not participate in something they believe in or just exercise their basic right. I would never do that," Swinney said. "But as a coach, our job is to teach, education, and inform. I consulted with the team. The only thing I said, if you're going to participate, make sure you know what you're signing up for. The agenda, message, and the fine print if you will. Because you're not going to be 'Johnny Joe The Student.' You're not going to just blend in. You need to be prepared to be on the news, on ESPN and so forth because of who you are. So make sure you know what you're getting into. That's the only thing I said."

Swinney on the allegation that he repeated the n-word

"I was hiring Mike Reed, who has been my DB coach since 2012. We were in the locker room touring and music was blaring and every other word was the n-word. I was embarrassed,” Swinney said. “What was said this week was absolutely false. In fact, the player playing the music called me this week and said, 'This is crazy, coach, this is an absolute lie.' I said I know. Anyway, I stood before the team and told them I don't want to hear the word. I'm trying to walk a coach around and I'm hearing the n-word over and over and over. Never did I repeat that word. Wanted to address that."

"The last thing is I had a t-shirt on and someone took a picture. It's a shirt I've had for a couple of years," Swinney said. "It was given to pretty much every coach by the National Football Foundation, and that's been their promotional thing since 2014. I would say any insinuation that I was trying to mock the Black Lives Matter movement is an attack on my character and really sad. I will also say I wholeheartedly support Black Lives Matter. In fact, I don't quite think that's adequate enough. I think black lives significantly and equally matter. To me, Black Lives Matter is kind of like, 'We matter too.' Black lives significantly matter. God loves us all equally. We are all first-team, all five-stars in the eyes of God. And that is what I believe.”

On loving his players and creating change in his program

"And again, actions are much louder than any words I can say. I have always loved my players. I'm tough on them but I love them deeply. This past week, it has hurt, it has been hurtful to see the pain in my players and to hear the pain in their voices. It's also hurtful to see our program be attacked. But what I know is God never says 'oops.' We have the opportunity to grow, learn, listen, get better and stronger, and that's what we'll do.

"I'm not a politician or elected official, thank goodness. But I do know I have been able to play a part in helping to create generational change for many black men the good Lord has entrusted me with. When I got this job in 2008, the very first thing I did was hire Jeff Davis. He was my neighbor. I wanted to equip these young men with the tools they need for life. And man, Jeff Davis, he created P.A.W. Journey from that. And now we have five people, that's all they do every day is create generational change. The next thing I did when I got the job was hire one of the greatest men I've ever known in Woody McCorvey. He's not just a great black man. He's one of the greatest men in the country. Coach McCorvey has been a father and mentor for me for 30 years."

“This is a historic time in our world and in our country, and as a coach and as a team, we will do our part to create positive change against racism of any kind, social injustice and police brutality. I always have believed that actions are a lot louder than words, and I love our team for the actions that they have already taken with a great town hall meeting and lots of communication in our position meetings. We had a wonderful senior meeting last week with just great discussion and it was just awesome to see and hear our young men speak, and just wonderful brotherly love. We’ve got a team meeting coming up and many other things, so I’m proud of the actions that our guys have already taken.

“We’re just a football program and I’m just a football coach, but Clemson has been a leader on and off the field for the past decade, and we will continue to be a leader and a light for many. We are a unified football team and we will work to unify others by how we serve, by how we play the game and by how we do our jobs as a staff. We have always had great leadership within our program and, man, this team is no different. It has been incredible to see this brilliant group of young people lead right now, and [I’m] so proud of them. This group of leaders on this team, they are ready to lead the way to being a part of the solution for this country. I stand with my players and I will help them any way I can to unify people and help create positive change.”

“We will continue to communicate and continue to get better. We have much more work to do, but we have taken a lot of action over the past decade to help create change for our players and our community, and we will continue to do that. This is a historic time – a historic time — and the time for change is now in so many areas that have affected our black players and their families for many, many years. And again, we’re just a football program, but we will do our part to create great change in this world. God bless you.”