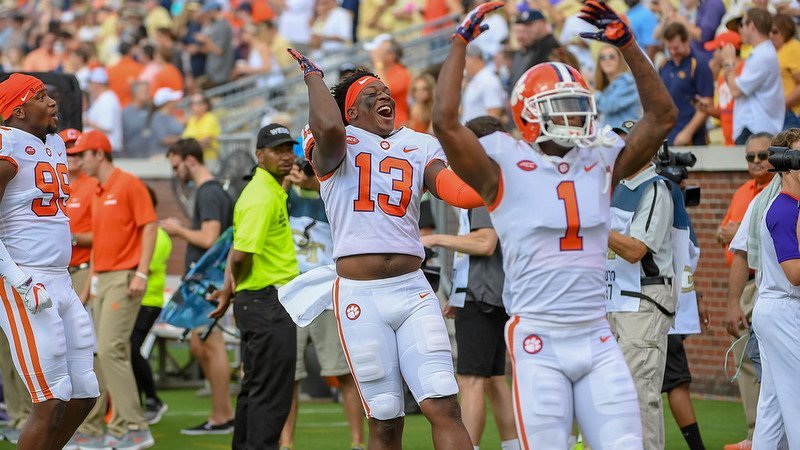 Trips to Atlanta are fun again.

There was a time when a trip to play in Atlanta almost meant a certain loss for the Clemson program, but that turned around and the Tigers have won a bowl game, a kickoff classic, and two straight games against Georgia Tech inside the city limits.

That includes Saturday’s 49-21 thrashing of Georgia Tech, a game that might signify the changing of the guard at quarterback for the Clemson program. I understand that’s been the hot topic all weekend so I’ll jump right in with an opinion.

Many people feel like the coaches should have anointed Trevor Lawrence as the starter to begin the season, but I think this has been handled the right way by the staff. Defensive end Clelin Ferrell spoke out at the ACC Kickoff and said that Kelly Bryant deserved to be the starter and that Bryant is a team leader, the kind of player the rest of them look up to.

The coaches understood that dynamic but also told anybody that would listen that both quarterbacks would get the opportunity to play. Head coach Dabo Swinney even told us that he thought the competition would play out on the field, and it has. Co-offensive coordinator Tony Elliott told us multiple times during August camp that he wasn’t worried about the team dynamic, that team members would recognize which player gives them the best chance to win.

That appears to be Trevor Lawrence at this juncture. The team needed Bryant in the worst way at Texas A&M and the veteran responded by leading the Tigers to the win. I still think Kelly Bryant will play a big role for this team this season, whether it’s at quarterback or continuing his role as a team leader.

I’ve spoken with several former players since Saturday night, and they all agree that Lawrence deserves more playing time, but most of them also think Bryant deserves to start. I had one tell me he thinks the coaches call better plays for Lawrence than they do for Bryant. Another told me that Lawrence didn’t fare as well against an elite defense and that Georgia Tech isn’t a good measuring stick.

Like the fans, the players’ opinions are all over the place. I am glad it’s not my decision but if you take out all of the other factors – seniority and last season and who is popular – and just go off of the results on the field, Lawrence appears to give the offense the boost it needs.

We will know more as the week progresses.

Tech gained 203 yards of offense, but 118 of them were gained after the Jackets fell behind 42-7 in the third quarter. To that point, Tech had gained 85 yards on 40 plays.

Clemson ran 66 plays and gained 480 yards, an average of 7.3 yards per play. The Tigers gained 24 first downs via run or pass, meaning the Tigers were picking up a first down or scoring a touchdown every 2.8 plays.

As for the last four seasons, here is another interesting note - in each of Clemson's four consecutive wins over Georgia Tech, the Tigers have out-rushed the Jacket option attack. Through those four games, the Tigers have rushed for 808 yards while holding Tech to 510 yards. To put that last number in perspective, Tech gained 383 yards on the ground in a 31-17 win over the Tigers in 2011. Now for the hammer - during this four-game stretch, Clemson has 1,079 passing yards to just 277 for Tech. That means that over the last four seasons, Clemson has 1,887 yards to just 787 for Tech.

Clemson has outgained Paul Johnson’s squad by six-tenths of a mile. In four games.

*I spoke with linebacker Tre Lamar in the Georgia Tech weight room after the game (where they do postgame interviews), and I asked about this week’s matchup with Syracuse. I asked Lamar if this one game the Tigers knew was coming, and his eyes flashed.

“Absolutely. But, because it’s the next one.”

*Speaking of the linebackers – J.D. Davis had one heck of a game. Playing in place of the injured Kendall Joseph, Davis had 10 tackles to lead the defense. There were a lot of people who wondered if either of the Davis twins would make an impact on the program, and both have made not only a mark on special teams but both have stepped in and played well when needed.

I’ve also been told they are both the kind of young men a program needs – good citizens who show everybody else what it means to work hard.

Defensive coordinator Brent Venables said the coaches finished a team walk-through early Saturday morning and gave the players two hours of free time. However, Venables told his group that if any other players wanted some extra time to talk about Tech he would be available to talk. Instead of heading back to the room to play a video game or hang out with friends, Davis showed back up to go over the game plan.

It showed in his play.