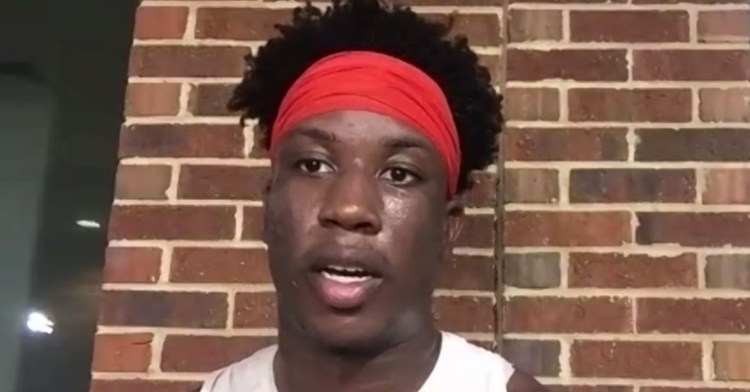 Clemson began preparations for the season opener at Wake Forest Monday, practicing for two hours at the practice fields outside the Reeves Operations Center.

Defensive end KJ Henry, defensive tackle Tyler Davis, and left guard Matt Bockhorst were the designated player interviews for the evening, and the following is a quick recap of those three interviews. The big takeaway, and we will have more on it later, is that the freshman defensive linemen are impressing everybody.

*Henry said that Myles Murphy is a freak of nature and “nothing like me when I came in.” He said Murphy is awesome, smart, long, explosive and loves the game. He is excited about the opportunity.

*Said Bryan Bresee is also a freak of nature. Said he is an animal and there “must have been abuse” how Bresee handled players in Maryland in high school. He said he is glad that he has a few years on the freshman class because they would all be coming in to take his job otherwise.

*Henry said he feels like he has been a leader since he has been here. He mentioned that taking a leadership role in the Peaceful Protest in June meant the world to him, and he learned even more about being a leader.

*They have thrown some ideas around about more peaceful protests. “It’s an ongoing conversation and it can’t stop and won’t stop.”

*He said that God put him on this earth to spread His message. He feels like he has grown as a person and a player.

*Some kind of activism could happen on gameday but nothing is set in stone.

*Clemson left guard Matt Bockhorst says the D-line group is unbelievably talented and he's been impressed with Tyler Davis in particular. "Unbelievable player" Davis has continued to get better and challenges him every day.

Among young guys, Bresee has a ridiculous get-off and is an unbelievable athlete. He's going to be a game-changer. Bockhorst says Bresee has shown traits even better than what he faced with Christian Wilkins. "The tools he came in with as a true freshman are incredible." Murphy is a really physical ball player per Bockhorst. He says Murphy is going to make an "awesome impact this year."

*Bockhorst says the first-team OL looks "nasty" in a word and are ready to bring an attitude to the game. Says they have a group of capable guys to make up for replacing four starters. Great at communication. He believes they take pride in finishing off blocks.

* Hunter Rayburn and Mason Trotter are two younger standouts and can play guard and center, although Cade Stewart has taken the majority of snaps at center. Both have been interchangeable on the two spots.

* Bockhorst says Tayquon Johnson "can be as good as he wants to be" and has time to develop. Physically unreal with weight room numbers among the best on the team. Biggest hurdle is in the mental game transitioning from defense. Bockhorst has confidence that he will eventually make an impact.

* Bockhorst said right tackle Jordan McFadden "is a ball player" and people should look out for him. Bockhorst added that he has the smoothest pass blocking he's seen. Bockhorst says he trusts Will Putnam "a lot" in that right guard spot and will be a really productive player.

*Says the first-team OL provides great competition and they are all studs. They compete every day and he says they bring the best out of him.

*Complimented Bockhorst and said he can do it all. He is aggressive and good with his hands, doesn't have many weaknesses. Said the lack of weaknesses is his strength.

*Said Nyles Pinckney is looking great. He is looking healthy and is having a great camp. He has gotten better with his technique. He is "being Nyles."