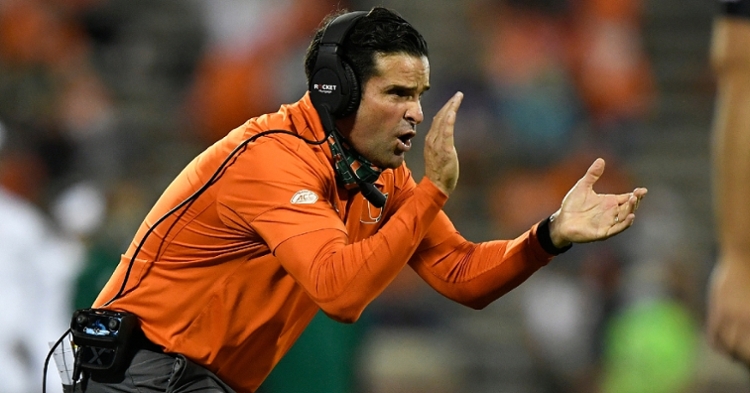 Diaz exhorts his team during the loss to Clemson (Photo courtesy of ACC).

CLEMSON – While Clemson controlled every aspect of Saturday’s game with Miami, Canes head coach Manny Diaz said his team’s lack of execution and discipline never gave them a chance to be successful.

Miami gave up over 500 yards of total offense to Clemson and was called for 15 penalties in the 42-17 loss to Clemson Saturday night in Death Valley.

Diaz gave Clemson plenty of credit, but he said his team didn’t perform up to expectation.

“First and foremost, I have to say congratulations to Clemson,” Diaz said after the game. “They obviously thoroughly outplayed us tonight. We are very disappointed in the way that we presented ourselves. We did not play with the … I cannot fault our effort, but our discipline, in terms of doing things right, made it difficult for us to execute against a top ranked team on the road. We have to own that and watch the film tomorrow and see why it looked the way that it looked. I do like the way that the guys stuck together. There was not any panic on the sideline or at halftime and we will build from this and put all our focus on beating Pittsburgh next week.”

Clemson’s defense held Miami to just 54 plays and 210 total yards, and it was the aggressiveness of the Tigers, especially on first down, that held the Canes in check.

“Obviously they were very aggressive. We know that they got an outstanding defense, and we just struggled to get the first first down,” Diaz said. “We couldn’t get the first first down. We couldn’t win the first play of the drive to get our tempo going. We knew that making plays on the outside lanes of the football field was going to be a big key tonight and they just about made every play, or we didn’t make the plays on the outside part of the football field, so the combination of those type of things and then just some mistakes that we made, that we just haven’t made throughout the course of the year. We have to analyze that and firmly give credit to Clemson as to why we performed the way that we performed.”

“He’s obviously extraordinarily talented, he’s got great toughness and he’s got the respect of everybody I’m sure in their locker room,” Diaz said. “I can talk superlatives on Trevor Lawrence all day, but Travis Etienne is the guy. He’s as good of a college football player as there is in college football. Obviously the whole plan on third down is to not let him throw the ball to Etienne and that’s easier said than done because when he gets in the open field he’s so dangerous. Again, we have got to do better than what we did because Trevor Lawrence would throw the ball five yards on a swing to Etienne and let him go. Those balls also count as passing yards. We were unable to takeaway what they do best and what their strength was on third down. We made adjustments and we got better at it as the game went on, but in those first couple of drives, it was really tough.”

Now, Miami turns its attention to a feisty Pittsburgh team.

*Diaz on the targeting penalties:

“How many times have I said it in this setting – how difficult is it to officiate the targeting? I have never seen someone hit someone in the stomach and have that called for targeting. It’s becoming very difficult to hit a quarterback now. [Amari Carter], I thought it was very difficult on his because I do think he was being pushed from behind and I think Amari was trying to miss Trevor Lawrence. Amari is not trying to miss you, it’s going to be a big hit. I have said over and over again, I do think there should be a way to have intent. Like a flagrant one and a flagrant two. The officials on the field, it’s out of their hands.

“But the one on [Keontra Smith], I struggle to think of another one that I have seen similar where you hit a guy and where his helmet was and obviously we teach all of our guys to keep their eyes up – I got to get a closer look, but they called it and obviously the depth, our secondary missing [Gurvan Hall] in the first half and you got to stick Brian Balom, a true freshman, in there in Death Valley. I think Brian has a bright future, but that was baptism by fire for a couple of drives when he was in there in the second quarter.”