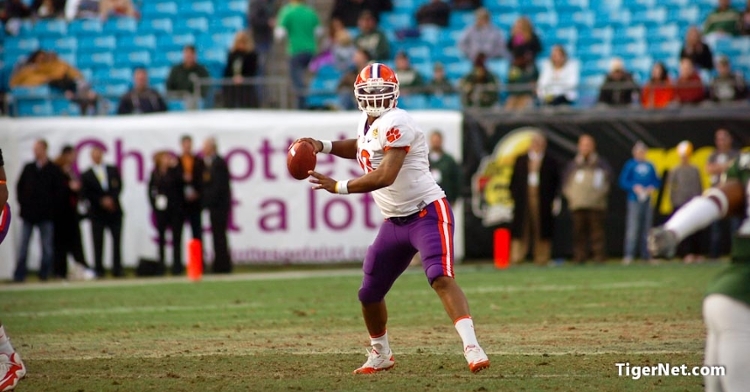 Boyd throws a fourth quarter pass in front of a lot of empty seats.

The desultory Meineke Car Care Bowl loss to South Florida was a decade ago but the memories, both good and bad, linger. The memory that stands out to me is a tearful Tajh Boyd standing in the tunnel outside of the Clemson locker room promising that 6-7 seasons were unacceptable.

Clemson was 6-6 on the season and coming off a loss to arch-rival South Carolina. The Meineke Car Care Bowl encouraged Clemson fans to send in emails, make calls, and send faxes offering their hope that the bowl game would pick the Tigers.

Following the announcement of Clemson and South Florida, the bowl said it expected attendance and viewing records for the matchup. What it got was dismal ratings and a mostly empty stadium as the Bulls held on for a 31-26 victory.

All of the players and coaches spoke in muted tones after the loss and the TigerNet message boards brutalized Swinney in his postgame comments.

“First of all, I’d just like to congratulate South Florida, they were well prepared and played well. They took advantage of some turnovers and capitalized well and you have to give them all the credit,” Swinney said. “The only thing really positive to say on our end is that we didn’t quit. They kept battling and kept competing until the end. We were a half-yard short of coming up with the other onside kick and who knows what would have happened. I’m proud of those guys for their ‘never quit’ attitude, that’s a great quality and I told them that after the game. I appreciate our seniors and all those guys who will be moving on in different directions, I appreciate their contributions. We’re going to miss those guys.”

Swinney then hinted that there would be staff changes forthcoming.

"Obviously we’re very disappointed with the outcome of the game and the way we played but it’s about moving forward for me," Swinney said. "I’m going to do everything within my power to make sure that I get us better as a football team and that this never happens again. We have to live with it and it’s nobody’s responsibility but mine. We’re going to move forward from this point.”

To many, it felt like a program on the descent, not the ascent, and Swinney knew the fans were upset.

“I don’t blame them for being upset, they should be upset, I’m upset and it’s nobody’s fault but mine,” Swinney said. “If I was in the fans’ shoes, I would be questioning me and doubting me too. We lost our confidence somewhere along the way and it’s been a tough year, but it’s going to be a new year starting tomorrow and I’m going to do everything I can to make sure that this never happens again. This is just a valley that we can all look back on and remember one day but we can come out of it and grow from it. I don’t blame the fans one bit for being ticked off, they should be ticked off. I’m going to do everything I can to get us better.”

Quarterback Kyle Parker didn’t return to the field after the half, and South Florida built a 31-13 lead early in the fourth quarter, further emptying the stadium.

Clemson made a last-gasp effort. Tajh Boyd, who was 13-of-23 for 112 yards, threw a 6-yard touchdown pass to Brandon Ford with 1:47 left. The Tigers recovered the onside kick, quickly moved down the field and Boyd found Ford again for a 10-yard TD. But Clemson’s second onside kick was touched by the Tigers about a half-yard short of the 10 it needed to travel and USF took over to end the game.

Boyd didn’t hold back in his postgame comments.

“We just have a lot of little things to work on. I think we have a championship-caliber team,” Boyd said. “Hopefully, we can put all the pieces together and become that championship team next year. Losing like that has been the story for us all year. It was disappointing the way it ended, but things happen for a reason. I think this was a time to get some of our guys to grow up a little and let them know what kind of team we could be next year.”

Boyd then said what Clemson nation needed to hear.

“This is unacceptable. We aren’t supposed to go 6-7 at a place like Clemson,” Boyd said. “Not with the tradition and the talent we have here. This shouldn’t happen like this, and it’s up to me to be a leader and make sure everyone is accountable and we have a great offseason and make sure this never happens again.”

Clemson’s newest leader was already taking the reins, and while many chafed over the losing record and wondered if AD Terry Don Phillips would fire Swinney, Phillips held firm in his belief that Swinney was the right man for the job. The staff changes worked, and the stage was set for a breakthrough in 2011.