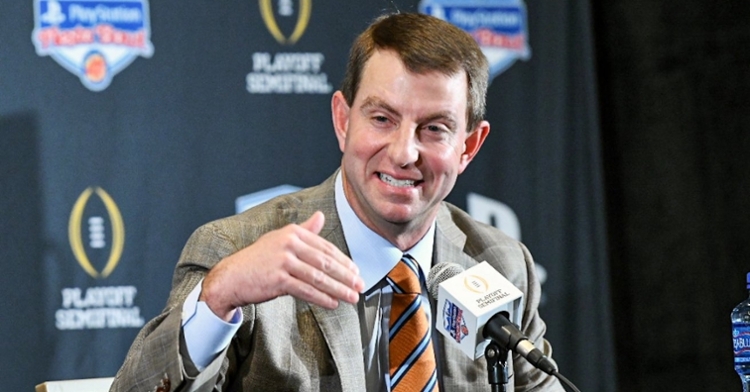 Swinney is one of college football's newest villains.

There is a new movie playing in the state of Ohio, and Clemson head coach Dabo Swinney is the villain.

The Big Ten has announced that they will attempt to play a football season – a month later than everybody else that matters – and the Ohio State fanbase and media outlets are taking the opportunity to let the world know that they are coming. And that they are angry. And that Swinney is a bad guy.

Once upon a time, Alabama head coach Nick Saban was everyone’s villain. In the vein of New England Patriots head coach Bill Belichick, Saban never smiles and is grumpy even after an 84-0 win. He was an easy target because the Crimson Tide have been on top more often than not.

Sorry, Nick, you can retire. The affable Swinney is now the black hat in Ohio. In the movie, Swinney – guns tied down and wearing all black – rides into town on his evil-looking horse as the “Evil Empire” music from Star Wars plays in the background. He gets off his horse, tries to enter the saloon and steal the girl.

He is intercepted by Ohio State head coach Ryan Day – muscles bulging and teeth gleaming in a megawatt smile – and Day disposes of the evil villain with practiced ease. As the credits run, people with foam buckeyes on their heads stand and cheer and cry as once again order is restored to the football world. They clap and they cry and go home safe and secure in the knowledge that good triumphed over evil.

In case you missed it, Swinney was asked about the Big Ten’s return during Wednesday night’s post practice availability and he said he was happy for the players in that conference. He also said it would be great if the Big Ten, which will play less games than everybody else, had a seat at the table in the College Football Playoff.

“I’d love for them to be,” Swinney said. “It’d be great. I’m happy for all those kids, first of all, and the coaches, that they get an opportunity to go compete. I think it’s just a crazy year. Who knows how many games anybody is going to have. I think if they’d have started in November, I don’t think that would’ve been feasible. ... If they’re going to play eight or nine games or whatever, I think they certainly will have the opportunity to compete. I have no problem with that at all. You have some of the best teams in the country in that league. It’s not those players’ fault. It’s not those coaches’ fault. I’m just glad that they’re getting the opportunity to get back to playing.”

Then came the quote that had Buckeye nation up in arms. Swinney said that whoever wins the title this season has the chance to be the best champion ever, and that would have been the case if the Big Ten had played or not played.

“That doesn’t have anything to do with it to me. As far as credibility and all that, it’s hard to win. Period. I don’t care who’s in the mix,” Swinney said. “The last time I checked there’s been a lot of champions come from conferences that were already playing. So, I don’t think it’d have made it any less competitive. But now they’re back in it ... it’ll just make it even better. Make it more fun. Who knows what will happen.”

That statement – that there have been a lot of champions from the conferences that were already playing – has made Swinney Public Enemy No. 1, even ahead of Michigan head coach Jim Harbaugh, who isn’t so much threatening anymore as he is a befuddled and lost professor.

The Ohio State website Eleven Warriors ran an entire story on the one quote.

The comments at the end of the story are hilarious, and telling.

Another one has taken such umbrage that they have taken on the visage of a teenager throwing a temper tantrum and has gotten big and mighty and told Dabo the clock is ticking. They have stomped their little foot and gotten mad, dadgummit.

You gotta remember, we had one Ohio State beat writer sitting behind us at the Fiesta Bowl and he openly cheered in the opening quarter. When the calls started going against Ohio State, he threw his pen. He threw a note pad. He cussed. He stomped. He was reminded – by an intern – that it was a working press box and he cussed the intern. And then he loudly announced that he had bought round-trip tickets from Columbus to New Orleans for his entire crew. Not sure if he was able to get a refund.

I love college football and I love the smack talk. We’ve needed it. The nation has needed it. And Clemson and Ohio State is a burgeoning rivalry that should be fun over the next few years. With Swinney as the villain, what could go wrong?

(NOTE: I was looking at the second story and how Ohio State dominated the entire game, and I went back and looked at the stats from that game. Ohio State came out and punched the Tigers right in the mouth – their gameplan was outstanding and Clemson wasn’t ready for what the Buckeyes were throwing their way. The Buckeyes ran 19 plays and gained a whopping 222 yards. Clemson ran 17 plays for 77 yards. However, the Tigers settled in and made this remarkable thing called adjustments. Ohio State ran a whopping 22 plays in the second quarter alone and gained just 74 yards. The third quarter? Seventeen plays for 70 yards. Things got frantic in the fourth quarter and Ohio State ran 27 plays. However, the first 23 plays led to just seven points. Domination? Yeah, that first quarter was pretty good.)