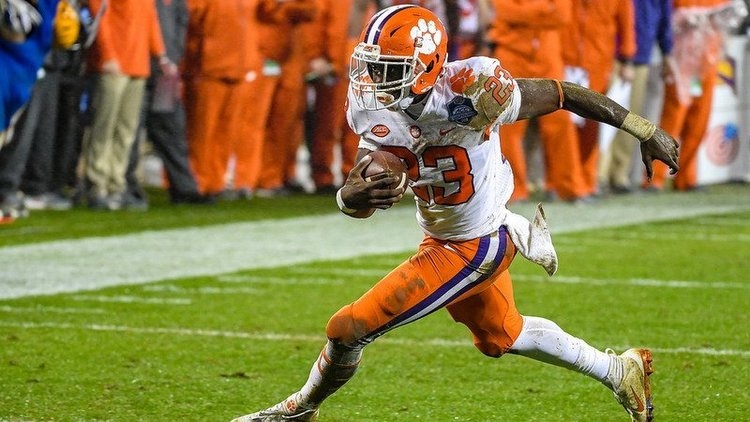 Dixon is explosive and has averaged 7.12 yards per carry in his career.

CLEMSON – The easiest thing for Lyn-J Dixon to have done would have been to pack up his bags, enter the transfer portal and wait for other college football programs to come calling. Dixon didn’t take the easy way out, and that pleases Tony Elliott.

Dixon has spent the last two seasons as the backup to Travis Etienne and enters 2020 with 1,182 rushing yards and 11 touchdowns on 166 career attempts and 162 yards on 15 catches in 389 career snaps over 28 games. He plays his junior season ranked second in school history in yards per carry (7.12) behind only Etienne (7.8).

Many expected Etienne to forgo his senior season and head for the NFL. After all, he’s already the school’s all-time leading rusher and doesn’t have a lot to prove. Dixon figured his chance to start was coming, but Etienne announced his return to Dixon had a decision to make.

"Some of those younger guys had to make a decision," Elliott said. "Because a lot of those guys came here and thought Travis would probably transition after three years and then they'd have their opportunity."

Elliott was having a conversation with Dixon when Etienne called with the news.

"Lyn-J is a young man that comes from a different background down in Butler, Georgia, and you know he's really just kind of figuring out life,” Elliott said. “He's a competitive guy. He was geared up to step up into that opportunity and actually step into that role... and actually it was kind of awkward because I was talking to Lyn-J one-on-one, and Travis called me while I was with Lyn-J to tell me he was coming back. I told Lyn-J right then. I said you have to make a decision.

"I think he was hopeful in a way, but not in a bad way. Nothing personal to Travis. They got a great relationship. But he was kind of hopeful Travis would move on, so he could step into that role. I think he was kind of taken aback, but after he walked out of the room he came back the next day with a smile on his face ready to go.”

"Really, really proud of Lyn-J. Because the easiest thing to do would have been to pack up his bags and move,” Elliott said. “But he decided that, 'You know what, I'm going to step back. I'm going to see this as an opportunity to mature and grow and play with a pro and learn how to prepare like a pro. And not worry so much about the quantity of reps I get, but rather the quality.' As he's gone through the spring, he's had a different mindset and different look in his eye. He's ready to compete."

Elliott said he’s seen urgency out of both Mellusi and Dukes.

"I don't know if it's more the guys about to come in behind them, but with Travis being back, they all want their touches. Coach (Dabo Swinney) used a great analogy,” Elliott said. “He said when you're feeding the fish, you got the pellets but there are not enough pellets for every fish in the pond. You drop the pellets and it's whoever gets to the top. So I said, 'Fellas, don't worry about how many reps. Just worry about the quality of your reps.' And we've proven over the years that we're going to play four or five guys, so we'll try to get you your opportunities, so just go compete and you never know.”