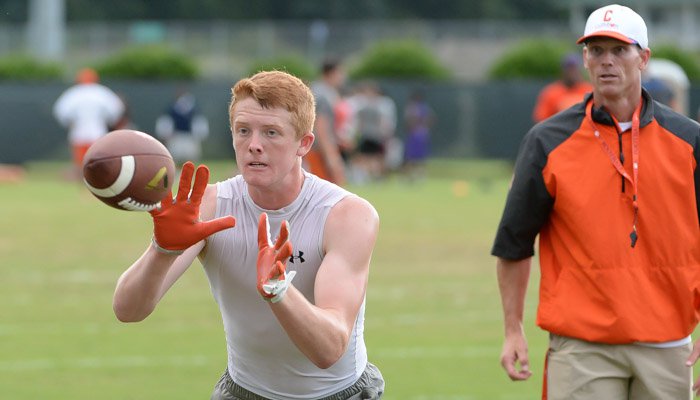 Jake Venables worked out Friday night and was impressive in drills

Dabo Swinney
Head Coach
View Full Profile ’s high school camp turned out to be just as interesting as Friday’s afternoon session, and TigerNet spent a good deal of time with the linebackers and defensive players.

Let’s start with the linebackers, and it all begins with Jake Venables

A lot of people have asked me since the offer went out last week if Venables was worth an offer or was it a case of a kid getting an offer because of his dad – he’s worth the offer. He’s a technician in all the drills, and his athleticism is very noticeable. He has to put on weight to be sure, but this is one of those kids who has grown up around the game and understands it like a coach.

View Full Profile – I’ve been waiting to see Skalski in person since he committed and kind of get a feel for the kind of player he is and can be. We weren’t disappointed in the tackling drills – he isn’t as explosive as other players we’ve seen, but he can deliver a knockout punch on a tackle and he plays with good hip flexibility. He also has a high motor and it’s evident he soaks up all the coaching he receives.

Again – I think he will play better in a confined area rather than out in space and he will have to improve his pass coverage skills. But the motor and the drive and the skills are there to be a really good linebacker at the next level, and spending some time in a college weight and speed program will improve the other issues.

Working with the linebackers was Luke Price, the younger brother of former offensive lineman Philip Price. Three of his four older brothers were on hand to watch the workout, and the 2017 product checks in at 6-3, 220. Price is drawing interest from some of the bigger schools while the smaller schools wait to see what direction he will lean.

I will say this – he plays with the same kind of nasty attitude we saw out of his older brother, and he isn’t afraid to throw his body around.

Dan Radakovich
Director of Athletics
View Full Profile showed up during the session, and he was introduced to 2016 receiving prospects Diondre Overton

*We mentioned Carrollton (GA) 3-star defensive end Michael Boykin following the earlier session, and he rode to the session on the back of Venables’ golf cart. He doesn’t have an offer – yet – but we’ve heard he will speak with Venables after tonight’s session.

Two other players we watched while with the defenders were Mableton (GA) Whitefield Academy’s T.J. Carter (6-4, 230) and Garner (NC) 2017 Matthew Butler (6-3, 250). Both athletes were standouts during the sessions with the defensive linemen, and it isn’t hard to see either one at end or tackle.

*Cameron Cloud hasn’t taken a snap of high school football yet, but he’s already garnering attention from the likes of Clemson, Virginia Tech, N.C. State and Wake Forest. The 2019 prospect and soon to be freshman at Greensboro (NC) North Guilford is in attendance at Swinney’s high school camp for the second consecutive year and looks to have grown a couple of inches since last summer. Cloud has good speed and is very fundamentally sound for a rising ninth grader. He’ll be one to watch over the next few years.

*2018 Carrollton (GA) defensive tackle Josh Walker worked out in the evening session. He’s quick for a 6-2, 275-pound lineman and beat several of his fellow campers during hoop drills. He’s raw when it comes to technique, but he’s extremely coachable and is quick to correct his mistakes.

*Speaking of hoop drills…..Freshman defensive lineman Albert Huggins and former tackle Rashaad Jackson were running this particular drill and they were both sweating as much as the players. Both guys are extremely competitive and were working hard to motivate the campers. Huggins would bark, “I know you’re not going to let him beat you” and then after the drill (no matter the outcome) he would look at the kids and say, “I can’t believe you let him beat you!” The Orangeburg native always has a smile on his face no matter what he’s doing.