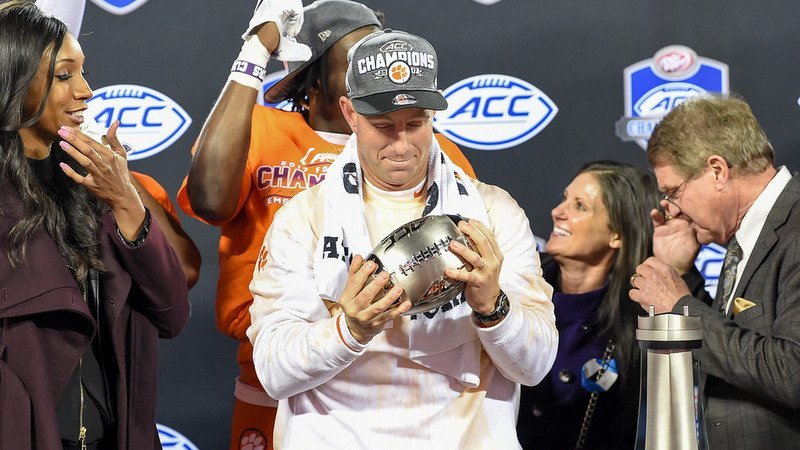 At some point this Monday morning, Clemson will release the depth chart for the opener against Furman, the media will descend on the indoor practice facility, and the first game-week interviews of the 2018 season will commence.

Don’t you love this time of year? It means cooler days, falling leaves, Halloween, Thanksgiving, fall Saturdays with our best friends, and Christmas.

There won’t be many, if any, surprises when the depth chart is released. Quarterback Kelly Bryant will get the nod to start the Furman game, but at that point, the real competition for starter begins. Head coach Dabo Swinney has mentioned more than once this August that he will let the situation play out in the games, and that’s what we expect to happen.

All of the pieces are in place for another championship run, and even though I’m excited about the promise of this season, it never hurts to look back, to see how Clemson arrived at this point.

My office is being turned into a nursery, which means whatever tiny space I had in our house is now gone, but that’s ok. At some point in the next four or five weeks, Nikki and I will welcome Eli Griggs Hood into this crazy, dysfunctional, and loving Clemson family.

Following the losses at UNC and Florida St. that season, Swinney promised to fix what was ailing the Clemson program. The desultory loss in front of a few thousand fans in the Meineke Car Care Bowl might not resonate with some, but I remember Tajh Boyd standing in the hallway outside of the locker, tears in his eyes, promising that 6-7 wouldn’t happen again. Not under his watch or Swinney’s watch.

The 2011 ACC Championship Game was a high point, the loss to West Virginia a low point. I wrote a piece after that game that said, “where do we go from here?” Up, obviously. The 2013 (2012 season) win over LSU in Atlanta, the win over Oklahoma in 2014, and all of the games in between have pushed Clemson to this point.

There are the lows – losses to Pitt and Syracuse, the five-game losing streak to South Carolina, the losses to Florida St., the 2011 loss at NC State, and the first title game loss to Alabama. But the good times – the wet celebration after the win over Notre Dame in the edge of a hurricane, the win over Georgia in 2013 in front of an electric and sold-out Death Valley, “We Will Rock You” and DeAndre McDaniel’s point against Florida St. all come flashing to the forefront.

And yes, Hunter Renfrow’s catch in the corner of the end zone that caused orange and white confetti to rain down on a Tampa field for 30 minutes, and tears to rain down all over Clemson nation.

All of those moments have brought us here, to the brink of another season. There will be chills and thrills, tears of frustration and tears of joy, and high-fives for everybody. There will be moments where we hold our breath and moments that take our breath away. There will be long pass plays and short runs, and the pure and unbridled joy of Clelin Ferrell dancing to the beat of his own music on third down.

It all starts this week and anticipation is at a fever pitch. Let the fun begin.

Don’t we love this time of year?

??Cle, Kelly, Amari and Sean sound off on excitement for this weekend!