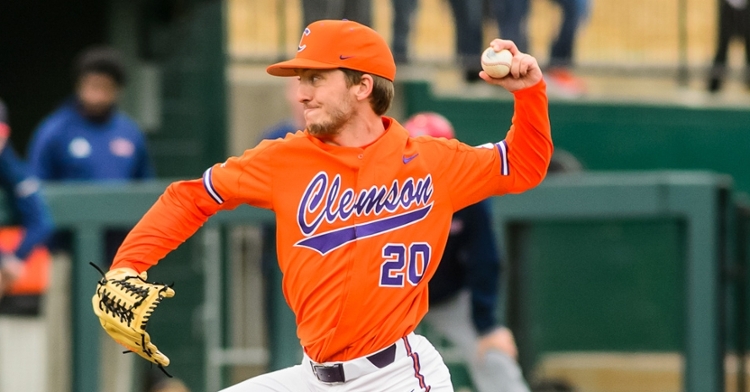 Clark was one of the mainstays of Clemson's rotation last season.

Last year, Mat Clark arguably was one of Clemson’s best pitchers, as he found his role as a weekend starter for the Tigers.

Clark, a redshirt junior left-hander, appeared in 11 games as a starter and three games as a reliever for the Tigers. In those 14 appearances, the Hilton Head native won nine of them and lost only three, while posting a 3.21 ERA. Clark pitched well enough to be named third-team All-ACC in his redshirt sophomore year.

But for Clemson’s ace, the offseason was about getting prepared for this upcoming year and not focusing on last year’s season.

“Just focus on getting better in a bunch of different aspects of the game. You know, last year was last year. We’ve got a new team now and we are excited to get going,” Clark said.

A lot of pitchers tend to lose speed and velocity on their fastball as the season comes to a close, but Clark seemed to be gaining speed on his fastball towards the end of last year. But now he has fully adjusted to his added arm strength and hopes to build off his 2019 season.

A lot of the talk heading into Clemson’s 2020 season is the strength of the pitching staff. With a variety of pitchers returning and some young arms making their way to Clemson this year, each arm will have a chance to play a role for the pitching staff.

“We’ve got a bunch of returners. We’re bringing back quite a few innings from last year,” Clark said. “And we also got a bunch of young guys that really proved themselves in the Fall and they should provide a pretty good role for us this year.”

Clark’s outstanding year last year provides big expectations for this year. Now coach Lee will look to Clark to be the difference-maker in must-win situations for the Tigers. Clark knows he has the ability to be that guy, but also has confidence in his fellow pitchers to step up too.

“I think we’ve got a bunch of guys that can fill that role, but I am going to try my best to try and win those big games for our team,” Clark said.

Clark and the Tigers have a lot of confidence heading into the season. The expectations at Clemson are to compete for championships each year and this team hopes to do that again this year.

“Our team just has a bunch of confidence right now,” Clark said. “We had a pretty good fall. We came back after winter break and were looking really sharp so we’re looking forward to getting back out there.”

Clemson hopes to end the season in Omaha this year for the College World Series and they will need Mat Clark to perform well if they want a good shot at that hope.

The Tigers kick off their 2020 season at home against Liberty on Valentine’s Day weekend (Feb. 14 start/4 p.m. first pitch).