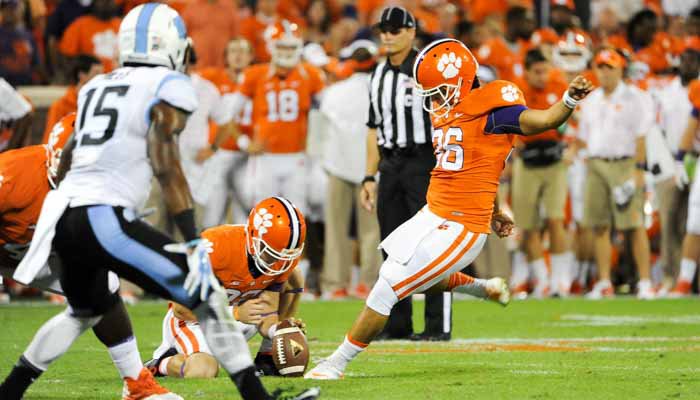 Lakip rebounded against UNC with 2 FGs – a 27-yarder and 45-yarder.

Most people would have expected – and some would have even liked – for the red-shirt junior to throw in the towel, just give up and concede the starting job to either Bradley Pinion

However, Lakip was determined to do the exact opposite.

After going 1-for-3 last week in Tallahassee, Lakip’s job as the starting place kicker was no longer intact and he was forced to dig down deep and show the coaches just exactly what he was made of.

Lakip told the media after Clemson’s 50-35 victory over North Carolina Saturday night that he never lost confidence in himself, but he needed to prove that he could get the job done.

“Bradley and I pushed each other this week,” Lakip said after the game. “On field goals, he was nipping at my heels. That's what it should be like. I think that and the support of my team and everyone else around me helped me overcome the struggle from Saturday night. I knew the war wasn't over Saturday night, contrary to some people's beliefs. I know myself and I love myself no matter what. You just have to pick yourself up and move on.”

Luckily, Lakip was able to get advice from one of Clemson’s greatest kickers of all time in current Arizona Cardinal kicker Chandler Catanzaro

“He [Catanzaro] was at practice on Thursday,” Lakip said. “We talked for a little bit. He just told me, 'You're on an island out there. You can't control what the fans or anyone else says. You can't control if you're not the starter on Saturday. You just have to work and trust in your process.' That's what I did.”

Lakip took Catanzaro’s advice and came back with his strongest outing of the season, making all of his extra points and both of his field goal attempts – a 27-yarder and 45-yarder – in Clemson’s 50-point outburst Saturday.

“It definitely feels good,” Lakip said. “Like I said before, it's just my job. Last week, I missed a couple but I never lost confidence in myself. I just went back to work this week. I was told at the beginning of the week that I wasn't the starter and I just carried a little chip on my shoulder and every day I performed. What I know is my potential. I won the job during practice. The hard work paid off in the end. I'm incredibly proud of the team and everyone else who stood behind me. I guess you could say that I hit rock bottom on Saturday night. When you're down that much, you find out what you're truly made of. I just went back to work and continued to do my job.”