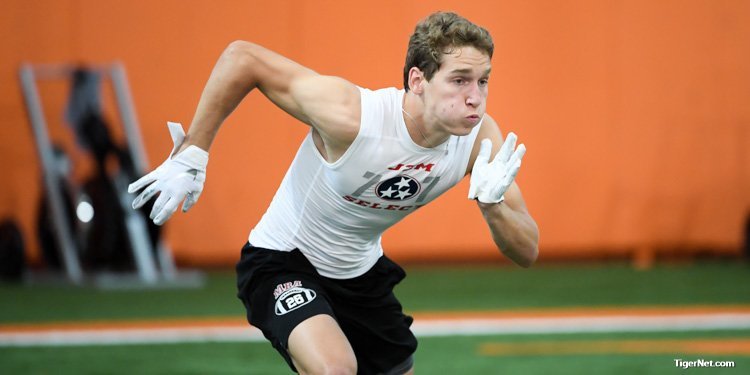 CLEMSON – Day one of Dabo Swinney’s high school camp is in the books.

Tuesday evening’s session wasn’t your typical session – there was a smaller number during the session, the skies were clear and the humidity levels were low. It didn’t even seem hot unless you were one of the defensive line prospects working out from the shadow of the indoor practice facility and indoor operations center.

The media watched the first 45 minutes or so of the session and we have some additional intel to pass along. I’ll start not with a recruit but with a current player – running back Travis Etienne.

The transformation phase of the summer seems to be working for the Louisiana native – he doesn’t look like a kid anymore, especially now that his braces are gone. Always powerful in his lower body, he looks even thicker. In other words, he could be dynamite this season.

One former Clemson running back that was in attendance looked at me, pointed at Etienne and said, “He’s going to be better than C.J. Spiller.”

*Quarterback Chandler Morris – the son of former Clemson offensive coordinator and current Arkansas head coach Chad Morris – was back for the afternoon session. He was the best out of the group of quarterbacks we saw, and he even shared a lighthearted moment with Swinney.

Swinney, obviously joking, told Morris, “You know, your dad, he was okay,” Swinney said. “But I hired him so one day I would have a shot at signing you.”

Morris broke into a huge grin. He was impressive during the drills I watched, especially with his arm strength to the sideline. The Morris and Swinney families are still good friends, and Chad’s wife Paula was in attendance with her son.

*Twins Jake Herbstreit and Tye Herbstreit were also on hand. Jake plays safety and Tye plays wide receiver for Montgomery Bell Academy in Nashville, TN, where they are rising seniors. The elder Herbstreit, who is a college football analyst for ABC/ESPN.

I will start with Tye – he has a quick first step off the line and you can tell he’s been well-coached. I watched a handful of drills and loved his hand-eye coordination and he runs good routes. As I watching, I realized who he reminds me of – a slimmer Will Swinney when Will would come to camp. Will was always technically correct and you could tell he knew the game. He worked with Jeff Scott’s group.

I was told the two look a lot alike, but Jake stands out in a different way. I watched four or five drills with the defensive backs, and he has a nice backpedal and a good change of direction around the cones while working with safeties coach Mickey Conn.

I am now intrigued and wonder where the twins are headed for college. I will try and find out.

*I walked over to the wide receiver drills just as the group was taking a three-minute break and I noticed that Amari Rodgers was talking to Jeff Scott, but about what I didn’t know. However, a few minutes later, up walks a young wide receiver – Sahmir Hagans – and it didn’t take long for him to fit in the ‘A Group’ of receivers.

Hagans, out of Philadelphia (PA) St. Joseph’s Prep and a former teammate of Georgia running back D’Andre Swift, already looks the part of a big-time wide receiver despite being only a sophomore (Class of 2021). His routes were smooth and he caught the ball well (even when the passes were well off target). He’s listed at 5-9, 170 but his athleticism is off the charts and he has no problems going up and high-pointing the ball.

*New commit Demonte Capehart worked out with Dexter Lawrence and former defensive tackle Jock McKissic. McKissic, now living in Los Angeles and pursuing an acting career. I watched Capehart for a few minutes and my opinion hasn’t changed – he’s gonna be a stud.