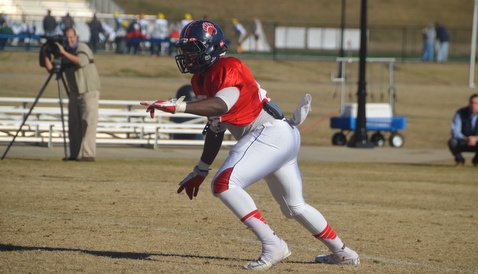 View Full Profile wanted to test himself against the best competition in the state, and last week’s Shrine Bowl was a perfect opportunity.

The 2014 Clemson linebacker commitment out of Belton-Honea Path (SC) B-HP was selected to play in the Shrine Bowl of the Carolinas, and responded to the elevation level of competition by finishing second on the Sandlapper team with seven tackles in South Carolina’s 28-23 win over North Carolina.

“It was a great experience, being around the 40 best players in the state and going against all of that great competition,” Joseph told TigerNet. “I got to learn a lot of new techniques and went against some great offensive linemen. It was also a good experience meeting the kids, because that is a good cause. And of course I got to play football, and it doesn’t get any better than that.”

Joseph also got to meet and spend time with other Clemson commitments, including Daniel running back Jae’lon Oglesby, West Florence kicker Alex Spence

Joseph said he also found out that Hearn is a very good offensive lineman.

“I had to go against him every day. He is a workhorse,” he said. “He is big and he moves really well. I know he wasn’t supposed to be at the Shrine Bowl initially, but he got his opportunity and he did very well. He will have a great career at Clemson. I can tell that because he has a great work ethic, and you can tell that by the way he practices. He is very physical.”

Joseph was challenged early and often during the week leading up to the Shrine Bowl as he tried to master the intricacies of the 3-4 defense, a scheme he had never played in before last week.

“I thought I did really well learning a new scheme, being the MIKE (middle) linebacker and making all of the calls,” he said. “It was a completely different kind of defense. I had to take on the big guards, but I felt like I took on that leadership role out on the field and took on my assignments. I had a great time and thought I did pretty well.”

Brent Venables
Defensive Coordinator / Linebackers
View Full Profile has told him in the past – that he is a smart enough to learn a system quickly.

“He told me that he has really high expectations for me,” he said. “He thinks that I am pretty mature for my age, and he feels like I should come in and learn the playbook. He told me that he sees me as a MIKE or WILL linebacker, and he said that he is going to throw a lot on me. I am looking forward to it, because he said he is going to be the kind of coach that will get the most out of me.”